How the Gin Room's Natasha Bahrami Became the Gin Girl 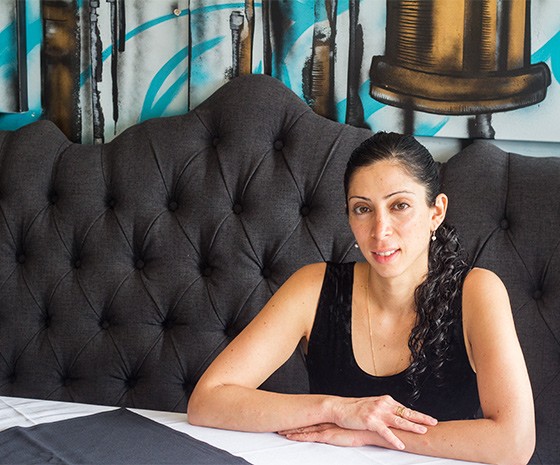 She always knew that the future of her family's restaurant rested on her shoulders, but it took her a while to embrace that fact -- if she was going to carry Café Natasha's torch forward, it would be on her terms.

"My parents have always been very supportive of me finding my own way," Bahrami explains. "But still, I knew that if they were going to move the restaurant forward, I was going to have to lead it. They told me, 'Listen, either you come back and run it, or we're not.'"

See Also: The Gin Rickey Is the Cocktail for Summer 2015

At the time of this heart-to-heart, Bahrami looked like anything but a future restaurateur. She had recently graduated from Webster University with an M.A. in International Relations and was living in Washington, D.C., working at the Middle East Institute. Her days were spent writing scholarly papers and learning IT.

But while on paper she'd made it, she couldn't shake the feeling that something was missing.

Bahrami's mother came for a visit and could sense her daughter's internal conflict. "She said to me, 'Look, I know that you seem to feel the need to have all of these day jobs, but you should feel free to do what you actually want to do,'" Bahrami recalls. Hearing her mother's words was like a light switch being turned on. She kept her day jobs, but by night Bahrami she decided to follow her passion, seeking out work at the hottest cocktail bars in the District and learning as much as should could about cocktail culture -- and, in particular, gin.

Armed with this knowledge, Bahrami moved back to St. Louis to take over Café Natasha -- only with a twist. Half of the restaurant would remain the family's Persian restaurant; the other half would become the Gin Room, a first-of-its-kind lounge dedicated to the botanical spirit.

It's a far cry from her days of researching Middle East politics, and Bahrami wouldn't have it any other way. "I had to explore all of my other options," she explains, " but in the end, I knew that my heart was here."

Bahrami took a break from preparing her housemade tonics to share her thoughts on the St. Louis food and beverage scene, mapping the mind and her dad's lamb chops.

What is one thing people don't know about you that you wish they did? I'm a sucker for enthusiasm. Not enough people have passion for what they do.

What daily ritual is non-negotiable for you? Mind maps. I make a list of everything I can shove into my day before rolling out of bed.

If you could have any superpower, what would it be? To speak and understand all languages.

What is the most positive trend in food, beer, wine or cocktails that you've noticed in St. Louis over the past year? Cross-industry collaboration. Local breweries pairing with doughnut shops and Mexican tacos interpreted by our favorite Asian chefs ... it's like having a genius talent pool come together for mastermind outside-of-the-box concepts.

Who is your St. Louis food or drink crush? Wil Pelly [Sugarfire Smokehouse, downtown location]. When he cooks for me, I swoon.

Who's the one person to watch right now in the St. Louis food and beverage scene? Sasha Alms and Joshua Johnson. (Element) These two have a ferocious passion and ridiculously creative ideas. They are about to explode on the cocktails scene with their Cocktail Collective.

Which ingredient is most representative of your personality? Caraway. Very few people understand how it's used, but it's often the behind-the-scenes element that transforms mediocre recipes to outstanding dishes.

If someone asked you to describe the current state of St. Louis' food and beverage climate, what would you say? Cultivating superstars.

Name an ingredient never allowed behind your bar. I've heard I'm not a particular fan of sloe gin...

What is your after-work hangout? Any chef willing to feed my soul after-hours. Mission Taco is my staple, but we take turns trying out all the newest spots in the South Grand/Cherokee area.

What's your edible or quaffable guilty pleasure? Stinky cheese. I can't get enough.

What would be your last meal on earth -- including drinks of course? Garlic everything, dad's lamb chops, generous pours from my private gin collection while surrounded by my very favorite people.