Barrister's Has New Owners, as the Tilford Brothers Look West to Kansas City

Eleven years ago, Jason Tilford and his wife Colleen opened Barrister's -- a neighborhood bar in downtown Clayton that became a mecca for soccer-loving St. Louisans.

But last week, the couple sold the business. Jason Tilford, who now serves as co-owner and executive chef of Tilford Restaurant Group, says the sale will allow the restaurant group to focus on expanding its wildly popular Mission Taco Joint chain into Kansas City.

The trendy taqueria currently has two locations, all in St. Louis. The group aims to open a new Mission Taco Joint in the Crossroads Arts District in Kansas City, Missouri -- south of downtown, six blocks from the Power and Light District. 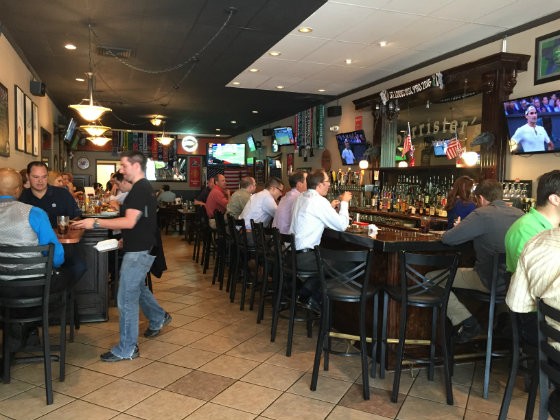 "We've been going at [Barrister's] for so long, almost eleven years, and I had to be there all the time and I just couldn't do that anymore," Tilford explains.

Barrister's was an outlier for Tilford; it was the only restaurant not co-owned by his brother Adam, and the only restaurant he owned that wasn't Mexican inspired. Mixing business with multiple family members, he acknowledges, was getting exhausting.

The Tilfords decided back in February that they wanted to sell the soccer-loving pub, but it took an introduction from a mutual friend and four months of negotiations for Sam and Kristie Boctor to become Barrister's new official owners.

"They will keep it the same," Tilford says. "Barrister's: soccer bar, neighborhood bar."

The Boctors did not respond to our requests for comment by press time.

Although the sale closed on July 1, Tilford will stay on as a consultant for six months.

The Tilford brothers fell in love with traditional Mexican food when they lived in San Diego as kids and frequently crossed the border into Mexico.

"We fell in love with the cuisine, the spices, the seafood," Tilford explains. "When we came to St. Louis, Mexican food wasn't happening well here. It was Tex-Mex, it wasn't good Mexican. So we opened up Tortillaria (8 ½ South Euclid Avenue) in 2004."

People loved what they were making, so the brothers opened Milagro Modern Mexican (20 Allen Avenue, Webster Groves) in 2012, Mission Taco Joint (6235 Delmar Boulevard) in 2013, and another Mission Taco Joint in Soulard (908 Lafayette Avenue) in 2014.

Their plans to expand to Kansas City fit right into that portfolio in a way Barrister's never quite did.

"The Arts District, it's really up and coming; it reminds me of the Loop," Tilford says. "We really want this to happen; the lawyers and landlords have this in their hands now. Our investment group is behind us."

We welcome tips and feedback. Contact the writer via email at [email protected]

Editor's note: A previous version of this story inaccurately stated the number of Mission Taco Joints in St. Louis. There are two, not three. We regret the error.