Dalie's Smokehouse Already Has Lines Out the Door in Valley Park 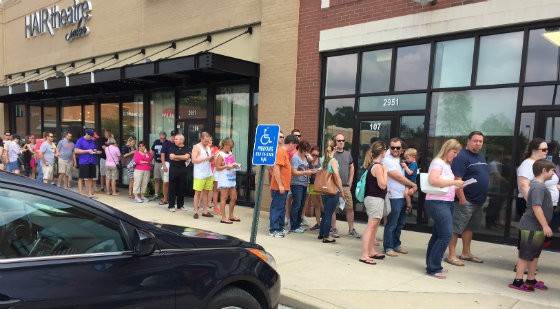 Dalie's Smokehouse, the third iteration of Mike Emerson and Skip Steele's barbecue empire, had been hoping for a quiet opening. The owners of Pappy's Smokehouse in Midtown and Bogart's Smokehouse in Soulard wanted a little time to iron out the kinks at this new restaurant in Valley Park before the crowds started coming.

But who were they kidding? This is Emerson and Steele. Crowds follow the pair whether they want them to or not -- and the very fact that Emerson was explaining his dashed dreams just days after opening to a crowd patiently waiting an hour to get through the door shows how utterly they failed in that mission.

The good news is that they haven't failed on the barbecue side. Even in its first week of operation, Dalie's Smokehouse (2951 Dougherty Ferry, Valley Park; 636-529-1898) is just as accomplished, and as tasty, as its urban older siblings. 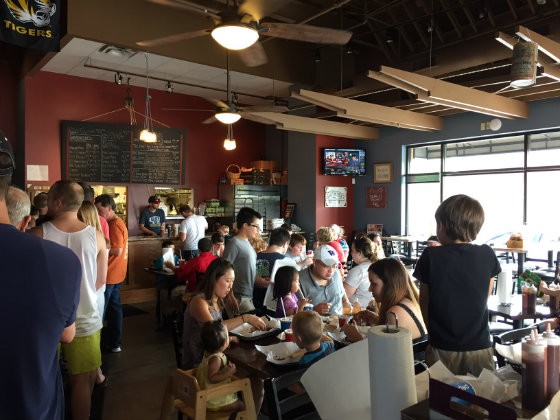 The look is very similar to Bogart's, with blood-red walls, a menu on a chalkboard above the cash register, and Pepsi products in the soda fountain. The menu, too, is nearly identical. You can get a sandwich or a plate -- the latter with two sides, the former with one. There are pulled pork and turkey, brisket and pastrami. There are ribs, a half-rack or full. The sauces are on the side, the original a tangy one in the Memphis style. You can also try a thin vinegary sauce a la the Carolinas if that's your druthers, or three others, all with varying degrees of heat.

There are a few changes: At Dalie's, you can order Barbecue Nachos, made with Billy Goat chips. And while the ribs have the same apple-spiced glaze as Bogart's, here they are finished with "Papa Joe" Dalie's sauce, which, like the restaurant itself, takes its name from Steele's grandfather. 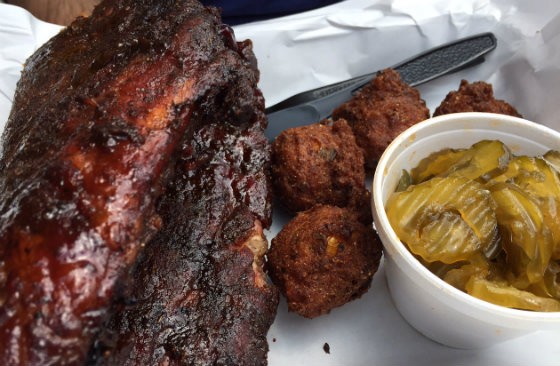 Among the sides, they're offering hush puppies here -- a really excellent version studded with fresh corn kernels. It's a nice twist on the cornbread you often get at barbecue joints. The slaw is also singularly delicious, and there's no need to limit yourself if you want to try the slaw, the hush puppies and the duo's signature fire-and-ice pickles -- on the day we visited, they were offering the addition of a third side to any plate for just $1.

Both Emerson and Steele were on site the day we visited. Steele passed out barbecue chicken to the patient line of prospective diners; the chattier Emerson swapped jokes, made small talk and ensured that the "pit crew" of workers had every guest well taken care of. Watching him work the line, you can see why the duo's restaurants have been such a smashing success -- he's an expert at making guests feel acknowledged without ever overstaying his conversational welcome. 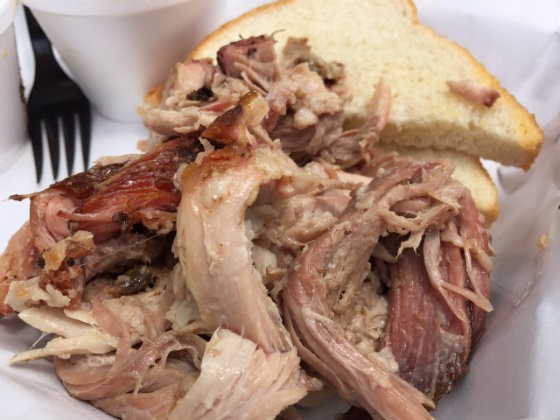 Once you finally place your order, the kitchen and the pit crew shift into high gear: Your food will be at your table in about five minutes, and you'll get several people checking in to make sure you're happy with it. Almost certainly, you will be.

Dalie's, like its siblings, serves only until the food runs out, and even in week one, that's been a real hazard. Standing in line, customers swapped stories about how they'd tried to show up on previous afternoons, only to be turned away at the last minute after the restaurant ran out of barbecue. Hey, it's not easy being popular!

Whether the bustling barbecue joint has been a good addition to this Valley Park strip mall depends on your perspective. The people trying to use the laundromat next door surely don't appreciate having to cut through a line of barbecue enthusiasts every time they want to add more quarters to the dryer -- nor does the little Chinese joint next door seem to be getting much business as Dalie's line completely blocks its front door.

But the Arby's just across the parking lot may be a different story. Between Dalie's incredibly long lines and its pattern of running out of 'cue, employees at the fast food restaurant have told their counterparts at Dalie's they've seen their best week in quite some time.

When you're really craving Emerson and Steele's magic, it's hard to imagine a simple roast beef-and-cheddar sandwich doing the trick, but what's a hungry diner to do? Even when St. Louis' barbecue masters set up shop in your backyard, you can't always get what you want. Sometimes, a little Horsey Sauce will just have to do.