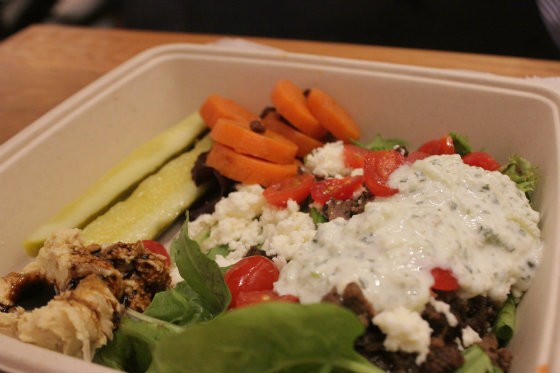 The Mercantile Exchange -- better known as the MX -- is attempting to become a hub of downtown street life in a city that has all too little of it. There's a movie theater. Soon, there will be the National Blues Museum. And there are a whole bunch of restaurants: another outpost of Chris Sommers' growing Pi empire, the second Robust Wine Bar and Cafe (the original is in Webster Groves) and a Snarf's.

And now there is also Taze Mediterranean Street Food, a new concept that's something like the Chipotle of Middle-Eastern food. There is a line with rapid assembly. There are numerous combinations of classic flavors in bowls or pitas. And, like Chipotle, the food at Taze is damn tasty.

The concept is the brainchild of a trio: co-owners and brothers Justin and Casey Roth, and chef Matt Borchardt. They're taking their idea seriously -- when Riverfront Times last wrote about them, Justin Roth and Borchardt had just left on a thirteen-day trip to eight different countries for menu research and development.

That research has paid off in a two-tiered menu. During the day, customers are encouraged to go through an assembly line, where they choose a protein (gyro-style chicken or beef/lamb; chicken, beef or pork kebab meat; or, for vegetarians, portabella or falafel) and then decide whether to do it as a bowl (with rice or lettuce) or a pita (white or wheat).

After that they can choose any number of toppings and sauces, plus one side and one variation of hummus. It makes for a colorful, balanced meal, served in a nicely weighty disposable box.

Four salad options are also on offer, with a similar choice of proteins available for each of them.

But after 4 p.m., Taze also offers a series of small plates, which the kitchen makes to order and delivers to your table, if you're so inclined to go that route instead of a pita or a bowl (or in addition -- why not?).

These "street eats" are a bit higher-end -- wonderfully soft Mediterranean spiced meatballs, cheese flatbread, or shrimp on skewers flavored with harissa. Prices range from $4.95 to $7.95, and all but the hungriest appetites could easily make a meal of two or three. 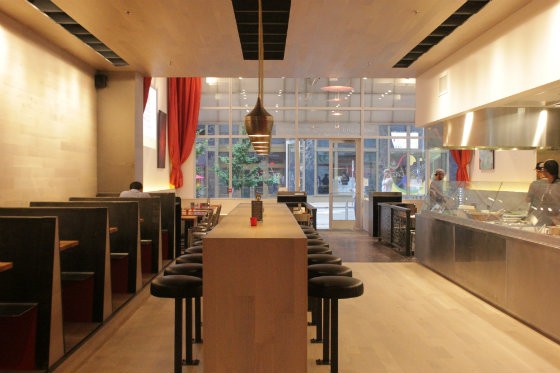 The space itself is sizable -- 3,400 square feet, designed by SPACE Architecture + Design. Guests can choose between an area with low tables facing a large flatscreen TV, or, further back into the space, a row of tall booths and a community table. There's also room in the back for larger parties, though the area still looked a bit under construction when we visited.

Overall, the ambiance is more Chipotle than date night; even though the room is smartly designed, the lighting is bright, and the counter staffers aren't pushing alcohol.

But beer and wine are available: six local craft drafts as well as a rotating selection of bottles which currently includes Bud, Bud Light and Stella Artois. "We also carry six white wines, six red wines and three sparkling options," says co-owner Justin Roth. "Most of the wine is from Mediterranean countries (Spain, France, Italy), but we do have a couple of domestic wines also."

The idea is to make Taze a place to meet up with friends. "We have always believed that our concept is more than just a lunch place," Roth says. 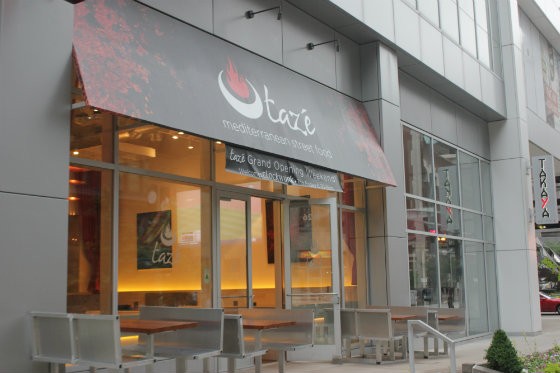 And it's impossible to imagine Taze won't do a brisk lunch business and also draw early-evening diners as well. The food is both flavorful and a good value -- where else in town can you get a pita piled with tasty toppings and a side and a dollop of house-made hummus for $8.95? The counter workers' offer to drizzle your hummus with a bit of balsamic vinegar is the kind of added touch you rarely find at this price point. Your stomach will be extremely grateful.