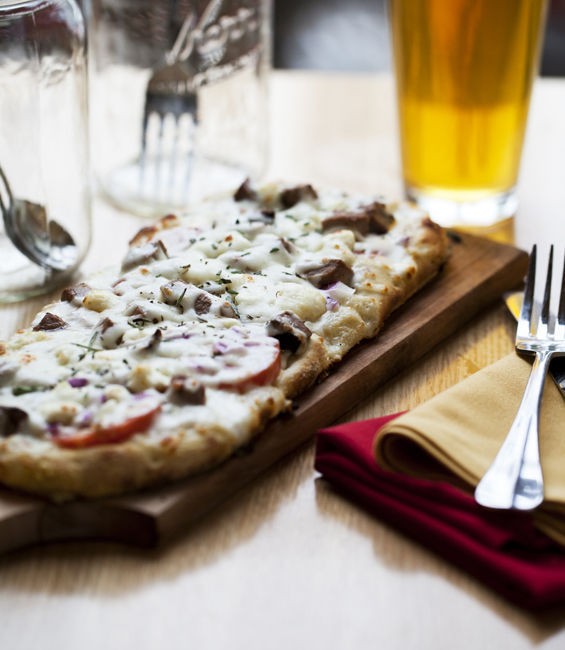 "I just want to get it right," he says. "And it's so wrong right now I want to put a gun to my head." Suffice it to say, when LaRocca eschewed Pandora and hired an "audio architect" to get the playlist just right, Kool and the Gang is not what he had in mind.

Crushed Red has become one of St. Louis' restaurant success stories in recent years in part because LaRocca and co-owner Powell Kalish are obsessed with every last detail. Their tables are bigger and wider than most fast-casual places. There's extra padding in the booths. There's real silverware, not plastic crap. And don't get LaRocca started on the lighting. He's convinced that it's a major reason Crushed Red does good dinner business even when many fast-casual competitors see business drop off dramatically.

"I just did a riveting interview on lighting for Restaurant Development and Design Magazine," he says, with an implied eye roll. "We want to make sure our lighting has a glow to it."

Whatever LaRocca's obsessions, the formula is working. It's not just that Creve Coeur is the partners' third location in as many years -- it's that they now plan to double that number within one year. Another location will open in St. Louis in 2015 (he won't say where just yet). They're also now beginning to franchise the concept outside of St. Louis. The first two franchises will open in the Denver area in August and September.

A restaurant industry veteran, LaRooca is convinced the concept has everything it needs to go all the way -- to be the next Panera, or Chipotle.

See also: A slideshow of images from Crushed Red in Clayton

"People really appreciate the fact that it's good, simple food, yet there's a degree of creativity in the menu and ingredients we use," he says. "And yet we're priced right there with all the other guys. The value quotient is there. We've elevated the concept, but you're not breaking the bank."

The Creve Coeur location is only different in a few ways from its sisters in Clayton and Kirkwood. At 3,300 square feet, it's a little bit bigger, in part to accommodate the area's lunch rush. Its kitchen is also set up a bit differently to allow the restaurant to handle bulk orders and catering -- and yes, unlike the others, this Crushed Red will deliver if you want your Wild Spring Salmon Salad, Sriracha Chicken Pizza or Warm Artichoke Spread dropped off at your office.

The menu, though, is identical. And the space, despite its shotgun layout, looks pretty much the same as the other two locations. (A former hair salon, it was a total gut rehab, LaRocca says.) Hey, when you've spent this much time getting every last detail just right, you'd be a fool to switch things up.

But on that note, you can bet that annoying soundtrack will quickly be a thing of the past. There's another meeting scheduled with the audio architects today. "We're going to get it right," LaRocca vows. After all, that's the Crushed Red way.