- See also: The Little Dipper Is Too Small for an Oven, Plenty Big to Kick Ass

Austin, after all, is booming — but that's precisely why Ethridge and his business partner Mikey Carrasco chose to set up their fast-casual Tex-Mex spot, Taco Circus, 800 miles to its northeast. After moving to St. Louis several years ago so his wife could go to film school, Ethridge discovered that the cost of living and ascendant restaurant scene made opening a place of his own in this city a realistic proposition. Moving back home for a few years after his wife finished school confirmed to him that he had a choice: Stay in Austin and cook for other people, or move back to St. Louis and work for himself.

It didn't take much to convince his long-time friend Carrasco to leave Texas to join him in the venture. As soon as Carrasco arrived in St. Louis, the pair began making preparations to go into business. The result of their efforts is Taco Circus, just down Morgan Ford Road from the iconic Bevo windmill.

Taco Circus is Ethridge and Carrasco's love letter to the taco counters they grew up eating at in Texas. The friends met as teenage graffiti artists and lived on the streets, off and on, during their high school years and early twenties. They stretched their dollars by filling up on cheap eats — taco counters are everywhere in Austin — and wanted to offer St. Louis diners a similar option.

Just like back home, they keep things casual. The restaurant has counter service, and chances are the person who takes your order and rings you out is the same one who makes your food — all within about three minutes. 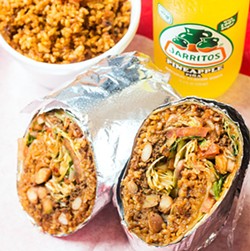 The food works well for takeout, but those who choose to dine in are treated to a festive atmosphere. Alternating bright blue and red walls are plastered with a mix of vintage circus and sci-fi themed artwork; a 1950s-style futuristic silver light fixture hangs above the cash register. A half-dozen small wooden tables and a few bar stools offer seating space, and there's usually an eclectic mix of music playing at a raised yet inoffensive level.

Though Ethridge and Carrasco were inspired by the low-key taco joints of their hometown, they've made one significant change: the quality of the ingredients. Taco Circus uses only humanely and sustainably raised meats sourced from local farms, specifically, Root + Holler for the pork and Rain Crow Ranch for the beef. The pair blends their own spices and makes everything from scratch, except the tortillas.

The quality of these ingredients shines through in Taco Circus' simple preparations. The restaurant's namesake dish is served on either soft flour, soft corn or crispy corn tortillas, and simply trimmed with diced onions and cilantro. Fillings include juicy chicken or steak fajitas, seasoned with mild chiles and char-kissed by the grill. Taco Circus' version of carnitas is a grilled and shredded pork steak, a homage to Ethridge and Carrisco's adopted home. The Berkshire pork is rubbed with a guajillo-heavy spice blend that gives it a deep, smoky-sweet tang. The meat is so well-marbled it set off the smoke alarm on one of my visits — blame all of the fat dripping onto the flames. 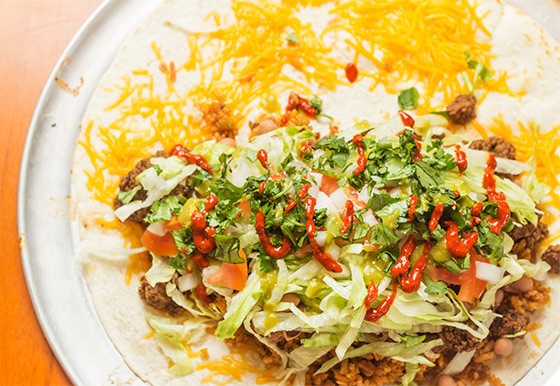 But the humble ground beef is perhaps my favorite meat at Taco Circus — in part because of the grass-fed beef's deep, full flavor, but also because the preparation here is so rich and juicy I almost mistook it for Texas-style chili. Ground guajillo and New Mexican red peppers mingle with the rendered beef to form a subtly spiced jus. It's positively heavenly when stuffed into a sweet, crispy corn tortilla.

Taco Circus' monster-sized burrito is a flour tortilla overfilled with a choice of meat (the chef on duty recommended chicken fajitas), chile-spiced rice, slow-cooked beans, cheese, shredded lettuce, diced tomatoes and white onions, and cilantro. I got mine "loaded," which means filled with guacamole and sour cream on top of all that, then doused with spicy salsa verde. If I closed my eyes, I would have sworn I was in a border town.

But that isn't even the highlight of the menu. It's been three days, and I still can't stop thinking about Taco Circus' breakfast tacos.

I understand why Ethridge and Carrasco lived off of these back in Austin — I could eat them every day and never get bored. Flour tortillas and a generous helping of scrambled eggs form the base, and diners then customize their taco with other fillings.

I especially enjoyed the breakfast taco with potato and housemade chorizo. The Mexican sausage is spiked with vinegar and a hearty dose of paprika, and the potatoes are perfectly cooked to the point that they're like mashed potatoes on the inside but still retain a crispy edge. However, my favorite version, by a landslide, is the breakfast sausage taco. The ground housemade sausage is seasoned with a simple, traditional spice blend amped up with extra black pepper and chile flakes. The not-so-secret ingredient is the high-quality pork. The difference between Taco Circus' product and one made with conventional meat is overwhelming. I ordered my taco with the works — potatoes, eggs, cheese and salsa verde. It was possibly the best $3 I've ever spent in my life. 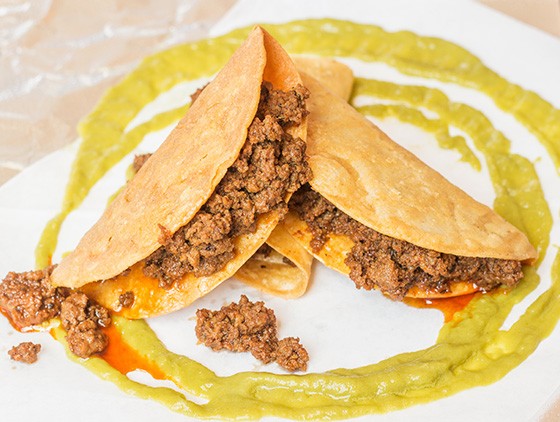 Taco Circus rounds out its menu with hot and mild salsas (a verde and a red chile), housemade guacamole and a version of the classic Texas breakfast dish known simply as migas. Judging the book simply by its cover, I'd say the migas are a train wreck: scrambled eggs, cheese, salsa and crumbled up corn tortilla chips are sautéed together, looking like someone took a Southwestern omelet and rolled over it with their car. I was shocked by how flavorful the corn tortilla and egg combination was. Drizzled with hot sauce, Austin's version of the slinger is definitely worth ordering.

That's the thing about Taco Circus: It doesn't serve the prettiest food in town. Items prepared "for here" are served in the red-and-white paper boats commonly used for French fries, and the to-go tacos are wrapped in aluminum foil. The cheese sticks to the wrapper, and I found myself having to scrape off a smashed mess of toppings back into the tortilla. The aesthetics do not obscure the flavor and quality, though, and for a few bucks, it's a steal. As soon as the place gets its liquor license (they hope within a few months), it should have a line out the door.

Ethridge and Carrasco joke that they've been pacing around rooms for years trying to find ways to make money — and somehow, the rooms keep getting nicer. I don't think it's much of a mystery why this is so: Taco Circus shows that when it comes to authentic Tex-Mex, these guys aren't clowning around.