Review: The Little Dipper Is Too Small for an Oven, Plenty Big to Kick Ass 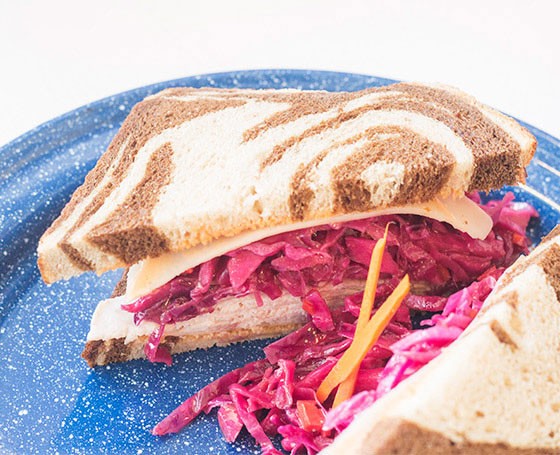 The owner himself had tapped Paul to follow in his footsteps — and it just so happened that the owner was his girlfriend's father.

Paul peddled his soapy wares for eight long years, watching as top chefs used his materials to help them prepare their kitchens. Then one day, on the way home from the office, he had a revelation. He turned his car around, walked into work and tearfully put in his notice. He just knew he belonged on the other side of the business. His plan was to open a food truck, and there was no turning back.

Paul might not have had the courage to take such a leap without Eversmann. As soon as he heard that his friend of 30 years was planning to open a place of his own, Eversmann presented him with an idea: Instead of a truck, what if they together opened a tiny shop in a newly vacant storefront on Cherokee Street? Smalls Tea & Coffee had recently closed its doors, leaving the micro-size space in need of a new tenant. It wasn't a food truck, Eversmann explained, but it was about the same size. And if Paul could handle the food, Eversmann would take care of the business side of the operations.

The pair wasted little time. Paul's last day at the soap company was November 14. On November 17, the friends signed the lease, and in February, they served their first customers as the Little Dipper sandwich shop.

To call The Little Dipper small is an understatement: The place is to restaurants what the tiny-house movement is to living spaces — shockingly miniature. A six-foot-tall person has the wingspan to touch both walls simultaneously. The shotgun-style eatery has just enough room for three two-seater wooden tables, a counter and an open prep area. A chalkboard menu hangs on one wall; the other is exposed brick. Both are painted white to make the room feel larger. When weather permits, a few wrought-iron sidewalk tables add to the seating capacity.

The Little Dipper's sandwich-focused menu is inspired by the years Paul and Eversmann spent playing music in Chicago. The restaurant's namesake dish is a classic hot Italian beef, soaked with gravy and topped with Provolone cheese and housemade giardiniera. Space limitations prevent the Little Dipper from having an oven, so Paul prepares the beef sous-vide — a method of slow-cooking food in a temperature-controlled water bath. The result is melt-in-your-mouth meat that's dripping with jus.

After it's cooked, the beef is then lightly seasoned on the outside, shaved paper-thin and piled high onto a crusty hoagie roll. The bread's soft interior acts like a sponge for the meat's juices and the giardiniera's spicy brine. My only knock is that I would have liked extra giardiniera. Next time I'll ask them to go heavy on the piquant vegetables.

As for the hot tuna sandwich, don't be fooled by its name; it's anything but a standard tuna melt. The flaked fish is tossed with diced carrots, celery and onions, and is dressed with so little mayonnaise as to be barely noticeable. The mixture is spread onto crusty bread, capped with melted Swiss cheese and drizzled with warm garlic butter sauce — basically, it's really good tuna-salad cheese bread.

Though the Italian beef is its signature, the Little Dipper gives equal menu space to vegetarian dishes. The vegan "Wheatburger" has characteristics of both a veggie burger and a savory baked good. The seitan (meat substitute) base is mixed with vegetable protein, flour and oats, then seasoned with Tamari (gluten-free soy sauce) and a mélange of North African spices. After it's baked, the patty puffs up until it's something like a falafel crossed with meatloaf. It's served on brioche and trimmed with traditional burger condiments like lettuce, tomato and onion. I enjoyed the flavor, but I recommend eating it in the restaurant. I ordered mine to go, and it got tough after sitting too long.

Another vegetarian option, the "Toatsted Tomato," is a fancy twist on cheese garlic bread. An open-face French loaf is spread with garlic oil, covered in melted Swiss and feta cheeses, and finished with sliced, oven-roasted Roma tomatoes. Cooking the tomatoes brings out their sweetness and softens them so that they become spreadable — like a rustic sauce.

The Little Dipper house-smokes the turkey for its "Carolina Reuben," a fiery riff on the classic deli sandwich. The sliced turkey is dressed with red cabbage slaw, piled on marble rye bread and slathered with Thousand Island dressing. Paul livens the condiment with enough Sriracha to make you break a sweat. Even the slaw has a touch of chile sauce, though the subtly sweet turkey mitigates the heat for a balanced sandwich.

In addition to the sandwiches, the Little Dipper serves a few appetizers and salads. The hummus is different from most of its ilk in both texture and taste. Instead of a smooth, grainy puree, the Little Dipper's version is chunky and creamy, almost like baba ganoush. It's also shockingly good. Fresh mint and liberal lemon zest brighten the dip so that it's pleasantly mouth-puckering.

My favorite dish, though, is the bagna cauda, a northern Italian tapenade made of butter, olive oil and anchovy. That such a complex burst of flavor was served to me in a plastic to-go ramekin was mind-blowing — the umami, salt and richness were so intense, it was as satisfying as eating a rib-eye steak. I enjoyed the assorted vegetables for dipping, but my favorite way of transporting it into my mouth was the soft bread. I soaked up so much onto each piece it nearly defied physics.

The Little Dipper takes advantage of the weekend revelers on Cherokee Street by setting up a late-night pop-up on the sidewalk in front of the restaurant. Paul can be found there until 1:30 a.m. cooking up anything that tickles his fancy: bacon-wrapped pork kebobs, tabouleh-stuffed avocados and his signature dessert — coconut-covered date balls. Word on the street is that they're already on their way to legendary.

Eversmann and Paul are making beautiful music at the Little Dipper: Paul's creations show him growing into his new role as chef, and Eversmann's business-savvy is apparent in its success. Their little restaurant may be one of the city's tiniest, but it's already a bright-shining star.