SugarBot Sweet Shop to Open in St. Charles This Summer 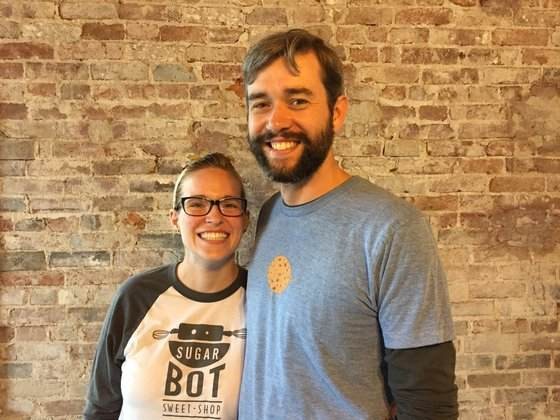 They hope to be open by late summer.

"I've been planning this since I was 16. It's what I've always wanted to do, but I never thought it could be a profitable thing," she says.

Lynch started her pastry career working weekends at Russell's, helping the Fenton restaurant open its second location, Russell's on Macklind, before taking a brief turn at Strange Donuts. Lynch then moved on to Ces and Judy's in Frontenac, creating menus for Opera Theater of St. Louis, Contemporary Art Museum and high-end weddings. She spent a year there getting experience in fast-paced catering and creating the business's first pastry program. "But I really wanted more control, some sort of ownership," she says.

Soon after, Lynch worked with donut savant Vincent Marsden at Vincent Van Doughnuts. She worked overnights, helping to get his store operational even while putting together plans for a shop of her own.

"I wanted a place where I could live above and work below," she says. "Separating shop-rent and house-rent can lead to a new business failing. I wanted to do it this way so that there was little personal cost to jeopardize the business."

Lynch and Huebbe, a civil engineer, found the perfect building last December in the extended historic district of St. Charles City. The pair, who started dating earlier that year, are now 50/50 business partners in SugarBot.

The couple worked tirelessly to get approvals for the remodeling and modifications they wanted to make to their future home and business. "We jumped right into the process as quick as we could," she says. "We knew it can take months for some businesses to even get off the ground."

Huebbe and his twin brother John are now at work renovating the entire space. "We've removed the plaster to expose the brick here and are planning to wall off the stairway section," Mark Huebbe says. "There's still a lot more to do." But he already has a plan for where everything will be - just what you might expect from an engineer.

The shop name might have been the easiest part.

"Well, sugar is my favorite food group," Lynch says with a sly grin. "And I've always had a thing for robots and vintage sci-fi."

She adds, "People are really excited for us to be open. As far as we know, this is the only American style, full-service bakery in this area."

The couple still have work to do. As remodeling continues, Lynch has set-up an Indiegogo account to help fulfill orders and get the word out, with the goal to raise $10,000 in 45 days. In the interim, they're currently fulfilling orders for pick-up or delivery Monday through Friday

"It's been so awesome to see everything come together. There were parts that were so frustrating, like waiting for bank paperwork," Lynch admits. "But now we're at the fun part, and it's something I can actually watch happen while we work."