On Friday, the newest business to locate on Cherokee Street quietly opened its doors.

The Saint Louis Hop Shop didn't yet have its full lineup of products -- many of the shelves were still empty. And the sign on the front counter wasn't yet finished; co-owners Ryan Griffin and Justin Harris had been painting it to say "So St. Louis," but they ran out of spray paint before they could finish the last letter, that "o."

Still, they thought, why not enjoy the foot traffic flocking to the street for the three-day weekend?

The move paid off -- with a steady stream of curious visitors stopping by, coupled with people who follow the shop on social media and were excited for a first look.

And so even though the beer supply is still limited (perhaps even more limited, after weekend sales, the co-owners confess) and the "So" in "So Saint Louis" still isn't quite done, the shop is now open for good -- with regular hours from Tuesday through Sunday. 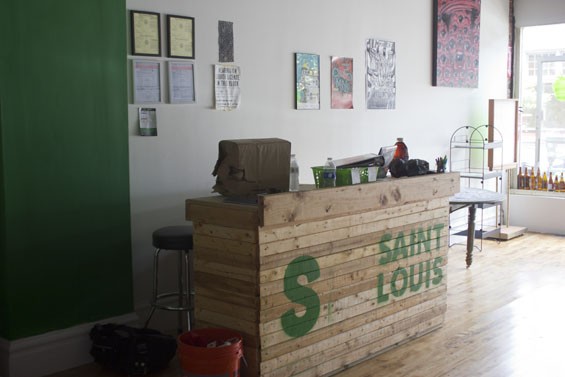 Co-owners Harris and Griffin are brothers who grew up in north city St. Louis.

In college, Harris says, he "got into beer." Moving back to St. Louis after college and a few years working in Memphis, he realized that shops to buy craft beer were lacking within city limits.

"There just wasn't anywhere in the city with a nice selection of beer," he says. "We were laughing about it -- 'We should open a beer store' -- but that got the ball rolling, and it continued since then."

Cherokee Street, says Griffin, was "one of the first areas we looked at. One thing that drew us in was the diversity. We wanted to step in and add to that. There are a lot of good things going on here on Cherokee."

The shop is spacious, with two rooms totaling nearly 880 square feet. The ceiling is original, with ornamental details; they had the floors sanded and stained.

In the front room, cabinets hold pint glasses emblazoned with the Saint Louis Hop Shop name, while the back room holds refrigerated cases holding their beer supply. The focal point of the back room is a small bar. There are just a few stools and room for one bartender to move comfortably behind it. But the idea isn't to host a bustling bar scene; the idea, say the brothers, is to give people a taste so they can decide what they want to purchase. Currently on tap? Civli Life, Modern Brewery, Perennial and Apple Knocker Cider.

Those are all local(ish), but they won't always be.

"We make amazing beer in this city," Harris says. "And so we'll always have a strong emphasis on local beer. But we also want our selection of beer to be as diverse as our clientele." They'll be welcoming suggestions of what to stock next.

They also intend to be a presence at numerous beer festivals and community events.

"Last year, Soulard Oktoberfest was our first opportunity to get in front of people," Griffin says. "We had eight taps, all local."

"There ain't no better way to explain what we're about than to talk to people and get that face time," says Harris.

Griffin adds, "The craft beer scene here is really big. It's more than something where you buy beer -- people are also making beer. Beer brings people together. And we want to contribute to that."