Review: The Gramophone Says Goodbye to Music and Hello to Damn Good Sandwiches 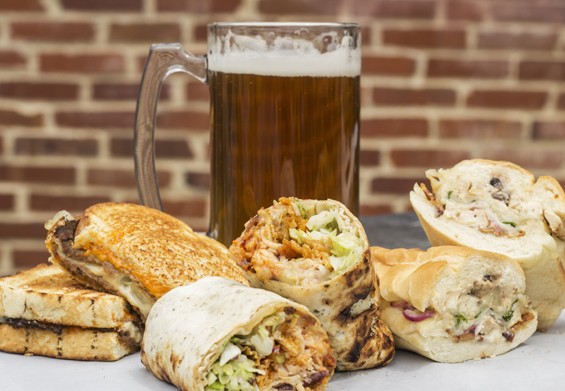 As the Grove neighborhood began to change, so did the Gramophone. It started two years ago with the addition of sandwiches — the idea was to offer something easy for concertgoers to handle that didn't require sitting at a table.

Then Urban Chestnut opened its Grove Brewery and Bierhall last March. Yawitz and Swanston noticed an increasing amount of foot traffic and inferred that the neighborhood was moving from a concert destination to one more focused on food and bars. To capitalize on the neighborhood's changing demographics, they closed the curtain on their music program this January and rebranded as a deli and neighborhood tavern.

Many people who frequented the Gramophone as a music venue have expressed angst over the changes, and it's true the difference is stark. The stage, which previously took up roughly a quarter of the square footage, has been replaced with booths, and a "beer bookcase" now divides the once open floor plan in two. Yawitz and Swanston refinished the floors and bar top, slapped on a fresh coat of paint and put in a pool table. The feel is a quintessential neighborhood bar — one that serves pints rather than craft cocktails. Notably, the owners also removed the large sound system and replaced it with one more appropriate for background music and the acoustic acts they now feature.

It's a dramatic difference. But for those willing to give the new concept a try, the Gramophone is doing well in its second act.

Indeed, while the owners have increased their food focus, that doesn't mean the place has morphed into a full-service restaurant. Patrons order the sandwiches through the bartender and receive a numbered table flag; runners deliver the goods tableside. Calling the place a deli is deceiving — the feel is definitely that of a bar that serves sandwiches (until 3 a.m., no less), but it's light and cozy enough that I would feel comfortable patronizing it by day as well.

Unlike the first incarnation of the Gramophone's sandwich menu — which was created from an employee cook-off — the new offerings come by way of Brian Hardesty (Terrene, Element, Guerrilla Street Food). The acclaimed chef contacted Yawitz and Swanston when he heard of their new concept and offered to consult on the food.

These new sandwiches, simply titled "The New Ones," have more of a classic feel than the "Originals," but that doesn't mean they're boring. The "BBLT," for instance, is like a traditional BLT pumped full of growth hormones. Served on Texas toast, a triple portion of bacon — and by triple they mean a hearty six ounces — gets some tingly heat from habanero mayonnaise. Thickly sliced tomatoes and crisp romaine lettuce provide a pleasant cooling effect.

In place of the traditional capers and crème fraîche accoutrements, the cold smoked salmon on crusty baguette gets its tartness from a few dill pickles and its creaminess from goat cheese. Lemon zest, sprinkled over the top of the cheese, cuts through the fatty fish and cheese, brightening the sandwich.

Gramophone's Reuben is adequate, though I missed the pungency that Swiss cheese typically provides (this version is cheese-less). The piquant sauerkraut and spicy Thousand Island dressing mix to form a deliciously slaw-like condiment, and I appreciated the almost sweet roastiness brought by marble, as opposed to traditional, rye.

Meanwhile, the "Turnpike" is for those who like the idea of a Reuben but don't want the kraut and corned beef. Roast beef, ham and coleslaw are piled on marble rye and topped with Thousand Island and Swiss (perhaps it should learn to share with its sister sandwich). It's like a meaty club sandwich crossed with a Jewish deli classic.

These days, you don't have to go to a Vietnamese restaurant to get a decent bánh mi — they're cropping up everywhere. The Gramophone's take on this Southeast Asian sandwich is surprisingly well-executed. Pork pâté, its texture somewhere between soft braunschweiger and creamy ham salad, is placed on a crisp, yielding baguette. Shreds of sweet-and-sour pickled carrots and thin slices of daikon, cucumbers and jalapeños dress the pâté, while a generous spread of mayonnaise honors the dish's French side. It's a surprisingly authentic specimen for a neighborhood bar.

I'm hard-pressed to say whether my favorite of the Gramophone's new sandwiches is "The Frenchy" or "The Grove Gerber." I expected the former to be a mediocre chicken sandwich, only to be surprised with a flavorful club sandwich packed with hunks of white meat chicken, chopped bacon, onions and sliced mushrooms. Swiss cheese melts over the top of the concoction, and a red wine aioli-slathered baguette holds everything together.

The most exciting feature of the dish, however, were the sprigs of fresh parsley — so herbaceous, I found myself wondering if they were actually cilantro. I'm surprised we don't see more of this flavorful lettuce substitute.

The "Grove Gerber," though, appealed to my youthful love of cheese bread: Thinly shaved ham, dusted with paprika, is served over cheesy garlic bread that's so buttery it may as well be considered a sauce. Why anyone would choose a cheese other than the classic Provel is beyond me — when toasted, it gets that golden brown, almost caramelized top but stays beautifully gooey underneath. I dare naysayers to mock Provel after trying this sandwich.

Side dishes are straightforward: spicy potato salad, Billy Goat chips and standard cole slaw. The roasted-garlic tomato soup is the most worthwhile of the offerings. The creamy tomato base is laden with so much garlic that it becomes positively chunky. It's magnificent.

Yawitz and Swanston want the new Gramophone to be a neighborhood gathering place — a deli by day and a bar that serves great sandwiches by night. The original concept may be a tough act to follow, but they've proven that their new eatery is a worthy second act. I can't think of a more perfect way to end a night spent drinking beer and playing the Walking Dead pinball machine than eating one of these sandwiches.