Review: If You're Into Over-the-Top Food, Busch Stadium Doesn't Disappoint 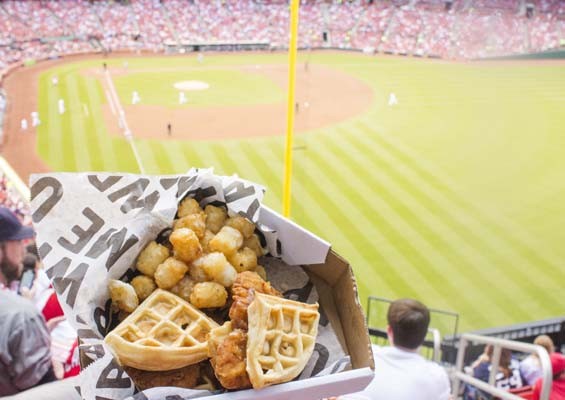 And then there were the hot dogs -- the smell of sizzling meat so intoxicating I could barely concentrate on the game. Once I finally got my mitts on one of those kosher all-beef beauties, it was revelatory: For me, going to the game is all about the food.

In recent years, the baseball gods have taken this notion to a level that borders on the absurd. At Busch, it started several years ago when Super Smokers BBQ set up shop there. San Francisco's AT&T Park upped the ante with crab and Champagne, and at Nationals Park in Washington, D.C., there's a Shake Shack outfitted like a Manhattan nightclub. Buy me some peanuts and Cracker Jack? Not when the rest of the menu is this interesting.

This year, the Cardinals have added to the spectacle with several new offerings: some upscale, a few gluten-free and others that are practically made for an eating challenge. Developed by Delaware North Sportservice -- a food-and-beverage management team that runs culinary operations everywhere from Lambeau Field to Wembley Stadium -- the additions seem designed to feed into a caricature of overweight, folksy Midwesterners.

Take the chicken-and-waffles sandwich. It beats the trend to death in the form of a fried, processed chicken breast sandwiched between two waffles and ladled with sticky-sweet maple-bacon gravy. I can't say I'd order it again -- the chicken was bland, the waffles spongy and the sauce on the gluey side -- but it wasn't overly offensive. I paired it with a side of "Ultimate Tots," an Ore-Ida inspired homage to a loaded baked potato crossed with deluxe nachos. Sour cream, salsa, black olives and white cheddar cheese sauce topped a heaping portion of the golden fried-potato nuggets. It's a guilty enough pleasure on its own, though the dish seems tailor-made for those who've had one too many cold ones. 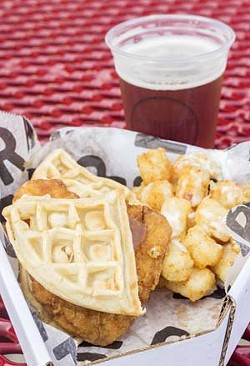 The double "Gooey Burger" is a welcome counter to the sad patties that concessionaires so often try to pass off as burgers. Two thick ground-beef patties are each topped with slices of American cheese and served on a sweet Hawaiian roll and garnished with lettuce and tomato. The key to this sandwich's ooze factor is the generous slather of "secret sauce," a tart and creamy mayonnaise-based dressing that tastes like Thousand Island. As advertised, I would have thought I would need a post-burger aspirin, but in reality, it was pleasantly decadent without being too much. The quadruple version may be another story.

Don't bother with the tired vegetable stir-fry at the Asian grill area. I've had better fried rice at greasy chop-suey joints. Instead, head down a few sections to the new Island Grill kiosk that serves the shrimp walking tacos.

The highbrow/lowbrow fusion of this dish is difficult to wrap your head around. On the one hand, you're eating out of a Fritos bag. On the other, it's filled with cooked-to-order shrimp, seasoned with freshly squeezed lime juice. I ordered one with all of the trimmings -- sour cream, lettuce, salsa, olives and jalapenos -- and was surprised by how well the dish was executed (though it did take about a half-inning to prepare).

Be forewarned, however, that there is a reason it's called a walking taco and not a sitting one. I attempted to hold it in my lap, but the top-heavy bag flipped over, spilling its contents down my legs.

What I was served, however, should have been called an outrageously succulent meatloaf sandwich. Juicy, barbecue-spiced ground pork is pressed into a terrine, stuffed with chopped bacon and cheddar cheese and wrapped in bacon. As it cooks, the bacon and cheese incorporate into the pork, seasoning the meat throughout and adding even more fat to an already rich dish. The concoction is glazed with molasseslike barbecue sauce, drizzled with barbecue aioli and placed on a Hawaiian bun that soaks up the drippings like a sponge. Were this on the menu of any one of the city's trendy barbecue joints, we'd be calling it one of the best sandwiches in town.

As someone who has only reluctantly come to embrace the joys of the fried Oreo, I had high hopes for the Oreo churro. It didn't deliver. The fried dough was spongy and dense, rather than light and airy like the Mexican dessert that inspired it. Perhaps the most disturbing component is the gluey "dipping sauce" that is supposed to simulate an Oreo cookie's cream center. Attempts to dip the churro in this semi-hardened wallpaper paste proved as futile as trying to drag a feather through quicksand. Next time I'll stick with the battered and deep-fried cookies.

There are some solid hits on this menu, and if you're looking for over-the-top stadium food that satisfies the need for shock value and a 4,000-caloric intake, Busch Stadium's new offerings will be just the thing. When you take me out to the ballgame, though, I'll stick with the hot dog.