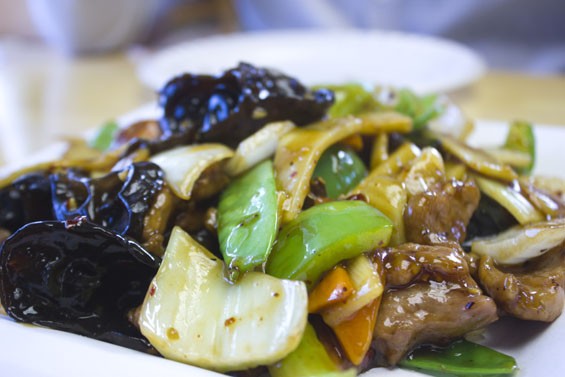 His latest project is a bit more down-to-earth: Chef Ma's Chinese Gourmet Restaurant (2336 Woodson Drive, 314-395-8797) is located in an old Taco Bell on a random intersection in Overland. Customers order at the counter and fetch their own drinks, and when the food is delivered, it sometimes arrives in a styrofoam container. The place is definitely not fancy.

But despite being open less than two weeks, the restaurant has already drawn a large following -- with large Chinese families and curious neighbors alike practically filling the dining room on the weeknight we stopped by.

Part of the draw is Chef Ma himself -- he's a gracious host, and though he's self-conscious about his English, he banters happily with customers, working the room as if were a much grander setting. He happily shows off the medal he won for winning some version of Iron Chef in Austin in 2008, and even if the menu itself declares that he won Iron Chef in 2009 (and seems to imply it was the Iron Chef), he's so good-natured it's impossible to get hung up on the details.

The other draw, surely, is the food; Chef Ma's menu is a bit more adventurous than many Chinese spots in the St. Louis area.

It's not just the day's specialties, all of which appear solely in Chinese characters on a board near the counter. The regular menu also offers, as one example, Hainan chicken. Originally from the eponymous Chinese island province, the dish is beloved by diners in Singapore, and you can get many good versions in a city like Los Angeles -- but it seems far less common in the Midwest.

Chef Ma's Hainan chicken is brought to the table cold, with the chicken served on the bone and coated with a gelatinous skin. There's no way to eat the chopped-up pieces you're presented than to pick them up with your hands and gnaw off the edible edges.

But only a fool would complain about that: This is wonderful finger food. You can dip the pieces in the delicious ginger-scallion sauce served on the side, as well as munch on the peanuts served as an accompaniment. Or pick the meat off the bone and mix the chicken, sauce and peanuts together with Chef Ma's signature yellow rice -- flavored with curry, coconut, garlic and ginger. The flavors are subtle, but genuinely delicious.

Even though Chef Ma hails from Hong Kong, the menu features a number of Sichuan-style presentations, from Kung Pao chicken or pork to eggplant so greasy and delicious, you'd swear it's not a vegetable at all, but rather something more akin to bacon. (Vegetarians beware: there is in fact a fairly significant amount of meat in this dish. You may want to ask questions before committing to an order.)

Chef Ma is delighted that so many of his customers have already found him at his new address. "They say, if Mr. Ma open a restaurant, I'm coming. I'm very happy people come back in," he says.

He's convinced Chef Ma's can serve an important niche. "I see a lot of Chinese and Asian people in St. Louis," he says. "I opened the restaurant for my old customers. But American people, they really like it too."