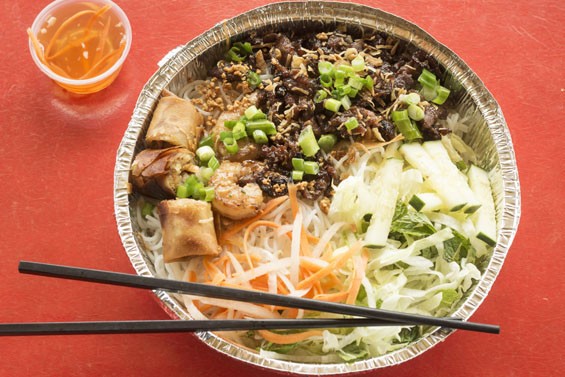 That there are now three pedicure chairs, three manicure stations and several tables topped with bottles of nail polish in what was once the dining room of a successful restaurant is mind-boggling. Perhaps what's stranger is the very concept of the place: a combination spa/bistro where guests can get a gel pedicure while noshing on spring rolls. Dee Dee Tran understands the apprehension, though she believes in her concept. As owner of the building's original incarnation, Mi Linh, Tran had enjoyed booming business and rave reviews. However, a family dispute led to the departure of her half-brother, chef Nelson Padilla, who had been the driving force behind Mi Linh's excellent food. (He's now the chef/owner of Linh Mi Gia.) The restaurant went downhill and lost customers, forcing Tran to try something different. She decided to combine her experience in running nail salons with her tenure at Mi Linh, rebranding the space as Red Lotus Spa & Bistro in late February.

Red Lotus looks nearly identical to Mi Linh: wine-colored walls, a giant black-and-white brush painting of cloud-covered mountains and lotus-blossom pendant lamps. To the left of the front door, the former lounge and satellite dining area that is now the "restaurant side" of Red Lotus remains mostly unchanged. There's a small bar with a few stools and roughly ten tables. 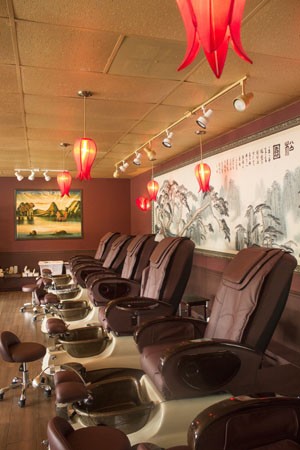 The spa side occupies its predecessor's main dining room and looks exactly like you might expect -- as if a nail salon had set up shop in a restaurant. Red Lotus has pushed several of the old tables into the middle of the room and refashioned them into a staging area for beauty products. A few hightop tables are scattered throughout the room for those who want to relax over appetizers and drinks on the spa side while they select their services. The option to dine while enjoying a spa service or two is also available.

On my first visit, my friend and I dined on the restaurant side, finished our meals and took our nightcaps over to the spa for manicures. The second time in, I ate while getting a pedicure.

On both occasions, Red Lotus' food was adequate. Spring rolls, wrapped in translucent rice paper, were generously stuffed with shrimp, shredded pork, vermicelli, lettuce, peanuts and herbs -- the mint was pleasantly prominent. But while I appreciated the fried tofu's creamy-crunchy texture combination, it tasted incredibly bland. Soy-ginger dipping sauce provided the only hint of flavor on the dish, but this delicate liquid barely clung to the fritters.

Pickled carrots and daikon brightened a simple "Asian Salad" of lettuce, cucumber, mint and cilantro. However, chewy discs of bland fried wonton wrappers detracted from an otherwise successful dish. I missed pâté on the banh mi, though it was an otherwise respectable version, with thinly sliced grilled pork, mayonnaise, jalapenos, cilantro and pickled vegetables stacked onto crispy Vietnamese bread. Drizzles of soy sauce and butter combined for a deliciously rich and salty accompaniment.

I also enjoyed the strong star anise flavor of Red Lotus' pho; the rice noodles and thinly sliced rare beef picked up the fresh licorice taste. However, the broth hadn't been clarified or strained enough, leaving it on the greasy side. Still, it was an agreeable dish overall.

I'd previously had a religious experience while indulging in Mi Linh's butter-garlic chicken wings, and if not for that, I would have found Red Lotus' version decent. Unfortunately for Red Lotus, that history was on my mind, and their attempt at recreating such a mind-blowing dish was disappointing.

Flavor-wise, I enjoyed the peppery coating, which was spicier than Mi Linh's seasoning blend. However, the chicken was stringy, the diced green and white onions oily and the breading limp and greasy. Fine enough, were I a first-time diner -- but because this is the dish that put Mi Linh on the map, Red Lotus' version lives in that shadow.

I love that my hair salon offers me a glass of wine upon arrival. Half the fun of going to a blow-dry bar comes in the unlimited mimosas served with a $50 blowout. This seems to be what Tran is going for with Red Lotus, but the food component makes it a little awkward. It was fine when I received my spa treatments after dining, but combining the two was a bit off-putting. I couldn't help but feel a little dirty having some poor woman hunched over my toes as I gnawed on a chicken wing.

It remains to be seen whether Red Lotus Spa & Bistro will be an oasis of comfort or simply a place that pushes people out of their comfort zones. I may have left spiffier than when I arrived, but Red Lotus looked better before the makeover.