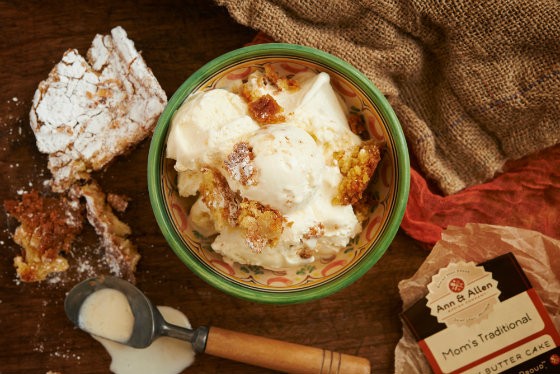 It might be the year's most hotly anticipated opening: Clementine's Naughty and Nice Creamery will open its doors at 1637 S. 18th Street with a special sneak peek tomorrow from 5:30 to 8:30 p.m.

The May 14 preview party will be the city's first official look at Tamara Keefe's Lafayette Square ice cream parlor, which has already earned a flood of positive publicity (including a mention on the RFT's list of the city's best ice cream parlors), even as its doors have remained firmly closed and butcher paper has covered its street-facing window.

But don't chalk up the buzz to mere hype. You can already get Keefe's ice cream at local restaurants, including the Pi chain and Ben Poremba's Elaia, Olio and Old Standard, as well as Whole Foods. Chefs have incorporated Clementine's intensely rich ice cream into their menus for a reason -- and local food lovers are already hooked.

And if you want to check out Clementine's new homebase, you don't need to be a VIP -- just on time. The first 50 people get free T-shirts, and the free ice cream is only promised "while supplies last." Pints will also be for sale to-go.

If you don't make the cut, though, rest assured: After closing on Friday, Clementine's will open for good on Saturday, May 16. Doors open at noon, with a ribbon cutting and other events planned throughout the day.

Keefe originally planned to open her shop as early as February, but even as retail demand for her ice cream exploded, a series of delays kept pushing back the opening date.

The permitting process was tough (the "naughty" part of her offerings refers to boozy ice cream -- but the licensing powers-that-be didn't know how to deal with booze that wasn't quite liquid). The older building proved a challenge, too. "Everything takes twice as long and twice as much," Keefe told the Riverfront Times in an email. "You never know what you are going to come upon and be faced with. Always a surprise at every turn."

Still, she says, she's thrilled with how things have come together; though less than 600 square feet, she's confident she space is warm and inviting. See for yourself tomorrow or Saturday; after that, Clementine's plans to be open daily from noon to 11 p.m.

Gut Check is always hungry for tips and feedback. Email the author at sarah.fenske@riverfronttimes.com