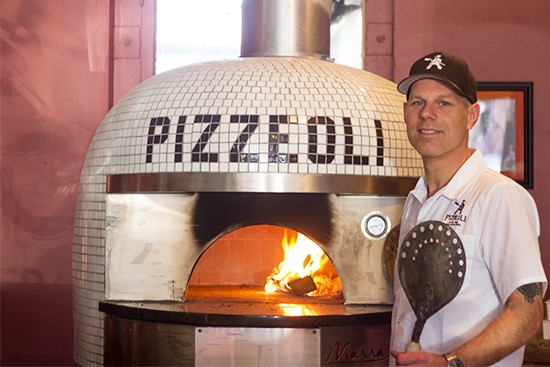 Scott Sandler started out making pizzas as a means of creative expression. "I've always had an artistic inclination," the Pizzeoli (1928 South 12th Street; 314-449-1111) owner states. "I wanted to do something with art as a living, but I wasn't sure how to do it -- you can't really make a living selling paintings."

Pizza, however, is a different story, and Sandler was happy to follow that path: "I consider what I do to be edible art."

See Also: Pizzeoli Has Perfect Neapolitan Pizza Down to a Science: Review

Sandler did not start out in such a creative profession. A mortgage investor by trade, he used pizza-making as an outlet for his artistic side while working in California (though he wasn't doing it Neapolitan style, he notes).

He moved to St. Louis in 2010 for business but continued to hone his culinary craft as a home baker. While experimenting with bread-making, he began to see the connection back to pizza. "Pizza and bread are the same thing," Sandler explains. "With pizza, it's all about the crust. If you take that position you will be more successful." After dining at the Good Pie, Sandler realized that Neapolitan pizza is the best example of what he was trying to show on the plate. "It's really easy to make mediocre pizza. [Neapolitan] is the purest form of pizza -- completely uncompromised."

Sandler took a break from making the vegetarian and vegan Neapolitan pies he now makes at Pizzeoli to share his thoughts on the St. Louis food and beverage scene, his talent for tarot and what you'll never see in his kitchen.

What is one thing people don't know about you that you wish they did? I am very good at reading Tarot cards, although I don't do it anymore.

What daily ritual is non-negotiable for you? In India there is a saying, "Mother is God, Father is God, Teacher is God, Guest is God." A simple prayer of thanksgiving to my teacher Sri Sathya Sai Baba is my morning ritual.

If you could have any superpower, what would it be? The power to love all equally without partiality, because only then will anybody be truly happy and happiness is what everybody is after.

What is the most positive trend in food, wine or cocktails that you've noticed in St. Louis over the past year? Since moving to St. Louis in 2010, I have seen a huge increase in the number of vegetarian and vegan options.

Who's the one person to watch right now in the St. Louis dining scene? To be honest I wouldn't know because I am not really a chef, just a "pizza guy," but I love what Cara Schloss and Monty Gralnick are doing at Seedz Cafe. It's all vegan and outstanding.

Which ingredient is most representative of your personality? Basil. Even after being singed and abused at 900 degrees, the fragrance is still heavenly.

If someone asked you to describe the current state of St. Louis' culinary climate, what would you say? Definitely on the upswing in terms of concept and quality. It's collaborative and very supportive.

Name an ingredient never allowed in your kitchen. Dead animals. No eggs either.

What is your after-work hangout? Home usually, but sometimes I frequent Civil Life Brewing Company, even though I can hardly finish a half of a pint.

What's your food or beverage guilty pleasure? Mexican Coca-Cola. I know it's not good for you, but I drink it anyway. For me it matches with pizza better than any beer.

What would be your last meal on earth? PBJ sandwich (fresh ground peanut butter and four-fruit jam from Bonne Maman on my own homemade bread), with almond milk on ice to wash it down.