Review: El Burro Loco Tries Hard to Be a Good Time, But That Doesn't Translate to the Food 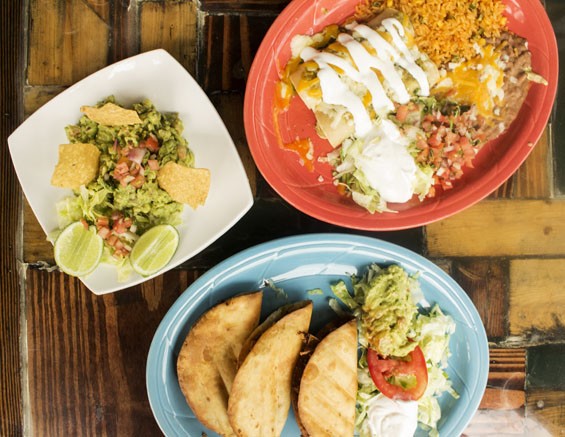 A guy in a donkey suit was playing a guitar when I walked into El Burro Loco. Standing on the patio, this six-foot-tall furry creature pitifully strummed his instrument, even though he clearly didn't know how to play. It was a sad caricature, though not as sad as the pale shadow of Mexican cuisine served at this three-month-old Central West End restaurant.

El Burro Loco is not going for authenticity. Obviously. Upon entering the sprawling restaurant, a former Pasta House, you need only observe the décor to catch the tongue-in-cheek attitude that owner Salvador Alonso and team are trying to convey: the Mexican wrestling masks and Dio de los Muertos artwork that decorate the shockingly colorful space, the giant painting of Speedy Gonzalez that adorns one of the walls, the mural of a braying burro that screams out over the main dining room. El Burro Loco checks all of the boxes for a typical Americanized Mexican restaurant.

The restaurant's "we're in on the joke" attitude carries through to the fiesta-like atmosphere the staff strives to create. Though I aggressively avoided eye contact, I still somehow ended up donning a sombrero, saying "Ole!" to a server with a camera, and getting serenaded by a Spanish guitarist in a bolero jacket (thankfully, he was a virtuoso compared to his cosplay counterpart).

At a time when many restaurants take themselves far too seriously, this playful schtick is welcome, especially at a location that has remained vacant for years on end. For it to work, though, El Burro Loco needs to back it up with a quality product. Unfortunately, this did not happen on my visits.

El Burro Loco's menu -- shaped to look like a folded quesadilla -- is confusing and difficult to read. Perhaps this is to keep us off our toes for the parade of mediocrity that follows.

My patience was immediately tested with the house margarita: watered-down, made with bottled "lime juice" and over-garnished with lemon and lime scraps past their prime. It proved a precursor for what was to come from the food.

The "tableside" guacamole was only prepared as such on one of my visits. It's a generous portion, though it needed more lime and salt. Somehow, the ready-made version I received on my first visit seemed fresher.

It's almost impossible to ruin queso fundido, and sure enough, the version here wasn't objectionable. I commend El Burro Loco for using rather spicy chorizo, though there was not nearly enough of it. Its heat cut through the rich, liquid cheese and obligatory grease slick that crowns this Tex-Mex staple.

Things got worse after that. I wish the margaritas had been stronger, because I needed something to cushion the blow that the entrées delivered. The chile relleno tasted like it was missing the chile. I had to search amongst the breading, cheese and salsa to find a thin piece of the dish's namesake. The accompanying tamale was much better; the sweet seasoned masa, served sans wrapper, tasted like Mexican cornbread straight out of a cast-iron skillet.

The "Burrito Vaca," meanwhile, stuffed with beans, cheese and ground beef, was like Hamburger Helper wrapped in a tortilla -- not necessarily offensive, but underwhelming. However, it was far superior to the fish tacos. The grilled tilapia was mushy and had an off taste, almost like potting soil. Traditional accoutrements like cabbage and lime crema were bypassed in favor of chipotle mayonnaise, pico de gallo, lettuce and sour cream. They did little to salvage the dish.

I was equally disappointed with the torta al pastor. At first glance, the fresh, fluffy telera bread looked promising. Peering underneath, however, revealed minced pork covered in a mysterious reddish orange sauce that could have passed for a sloppy joe. A visual inspection revealed a few pineapple tidbits, though they made no impact on flavor -- nor did the lettuce, pickle and tomato garnish. For some reason (and not because it was over-filled) the contents would not stay on the bread but annoyingly squished out the front of the sandwich. The best part of this dish was the side of french fries, albeit a paltry portion. These light-as-air potato poufs picked up the deep fryer's Mexican seasonings the way that a McDonald's apple pie takes on the taste of its fries.

The one redeeming dish at El Burro Loco proved to be the "Enchiladas Mexicanas." The platter consists three different varieties: chicken topped with salsa verde, cheese covered with queso dip, and beef with mild red chile sauce. All three were individually wrapped in well-seasoned corn tortillas and generously portioned. To be sure, there are better one in town, but it's a respectable entrée nonetheless.

And then, dessert. Like the table-side guacamole that was actually made in the kitchen, the fried ice cream wasn't fried. Instead, a frozen- hard scoop of vanilla ice cream was coated in coconut and chewy cornflakes.

Luckily, we ended on a high note with the churros. The simple, cylindrical doughnuts covered in cinnamon and sugar made me wish I had immediately cut to this part of the meal.

My experience at El Burro Loco was so poor I wondered whether the space is cursed. It's been five years since the Central West End Pasta House closed its doors, and plans for other concepts (Brothers Bar & Grill and Crushed Red Urban Bake and Chop Shop) were stymied for various reasons.

Perhaps Alonso and company are the victims of forces greater than themselves -- a culinary chupacabra that rises out of Euclid and sucks the life out of any restaurant that tries to take root. They're fighting hard to make it work, but the forced joviality is not enough.

If El Burro Loco is in on the joke, the gag is on the diners.