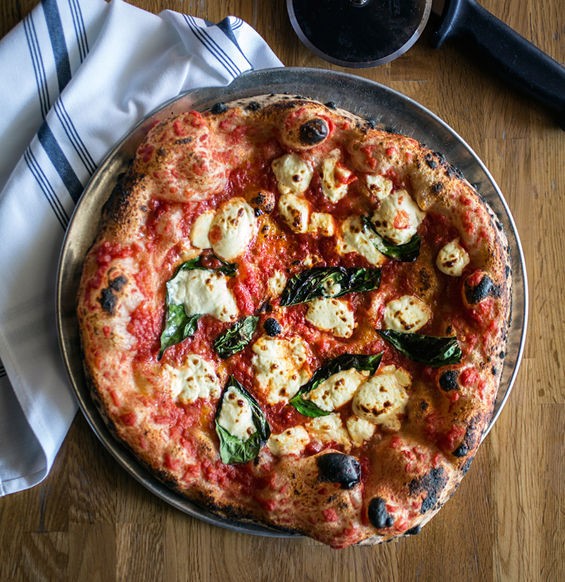 The Good Pie is apparently getting even better.

The Loop's favorite Neapolitan pizza joint is rolling out a new menu today, featuring lighter fare for summer plus five new pizza selections. It's also unveiling a new dough -- one that chef/owner Mike Randolph promises will be "much lighter and airier."

The changes comes in addition to the restaurant's roster of quirky new cocktails, which debuted last week and includes a drink called "Home Depot Dumpster Fire" (more on that in a minute).

The new menu's highlights include the following two starters:

The new pies now on offer include these five options: * Asparagus with egg, lemon and scamorza, or Italian cow's milk cheese, for $11.50 * Gorgonzola Dulce, with the classic blue cheese coupled with black walnut and honey for $11.50 * Anchovy, with San Marzano tomato, anchovy, oregano, chile and lemon for $9.50 * Pancetta, with pecorino, pistachio, red onion and rosemary for $11, and * Genoa Salami, withi pesto and mozzarella for $12.50.

The chefs have also tweaked two of the menu's classic pizzas -- the Margherita is now a smaller size and only $9 instead of $12.50, while the Salsiccia ($11) features house-made sausage.

As for that drinks menu, clearly, the Good Pie's head barman Jeffrey Moll is having some fun with this one. The sparkling wine included in one apertif is called "Sham-pagne." (Why didn't we think of that one?) A drink called "Three Fernets and a Baby" features Lazzaroni fernet, Contratto fernet, Fernet-Branca and Lazzaroni amaretto.

And then there's the "Home Depot Dumpster Fire," which includes whiskey, cream sherry, lemon, Licor 43 and egg white, along with something called "house-made lapsang souchong tea cordial." Per the restaurant's press release, Moll describes that ingredient as "a jerky store crammed full of Christmas trees and then burned to the ground."

If you're not curious enough to order one after reading that, well, there's really nothing we can do for you. But maybe you'll at least check out the new pizza dough?