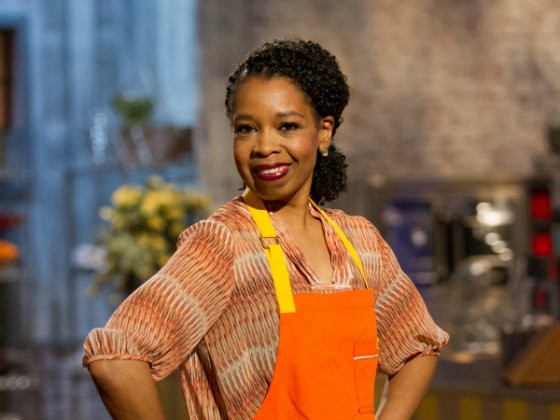 Simone Faure wasn't just a fan of the Food Network's Holiday Baking Championship. She was a superfan.

So when she heard that casting agents were in St. Louis interviewing finalists for a spinoff called Spring Baking Championship, she did what any obsessed fan would do: Despite not being on the shortlist, she showed up with her dark chocolate croissant, a.k.a. the Darkness. "Once you embrace the Darkness, all bets are off," she says, laughing.

Faure, of course, isn't just any reality-TV fan. The acclaimed pastry chef behind the La Patisserie Chouquette, the French-inspired shop in the Botanical Heights neighborhood, she also makes the desserts served at Ben Poremba's Old Standard Fried Chicken, Olio and Elaia. (Poremba is also a partner in the patisserie.)

Faure's dark-chocolate croissants are famously irresistible -- as is her personality. After those pastries arrived, it didn't take long for casting crew to mix up their finalist list. In February, it was Faure flying to LA to compete on the show.

The show premieres Sunday night at 8 p.m. Naturally, Faure can't discuss what happened during taping, but she will admit that her crush on host Bobby Deen has only grown. "He was super awesome," she says. "He seemed like a nice person on TV, but he's even nicer in real life."

Her admiration extends to the show itself. Not only did she love the set ("there was more room in that kitchen than I have at Chouquette"), but she loved the way the competition brought out the best in everyone -- from her fellow pros to the home bakers who were among the eight people competing.

"You got to see true creativity," she says. "Every single person brings something totally different to the table. I don't think people get how many different facets are tied up in desserts. We all have specialties -- no one can do it all. The show allows everybody to stand out."

When the show airs Sunday night, you can bet Faure will be watching. But that doesn't mean she's taking the day off. In fact, La Patisserie Chouquette will be open special hours that day, from 10 a.m. to 2 p.m. If you tweet from the store (use its Twitter handle, @ChouquetteSTL), you'll get free "hashtag cookies."

"Or maybe we'll go with 'hashtag macarons,'" Faure says. "That would be easier."

Spring Baking Championship kicks off this Sunday, April 26, at 8 p.m. on the Food Network.