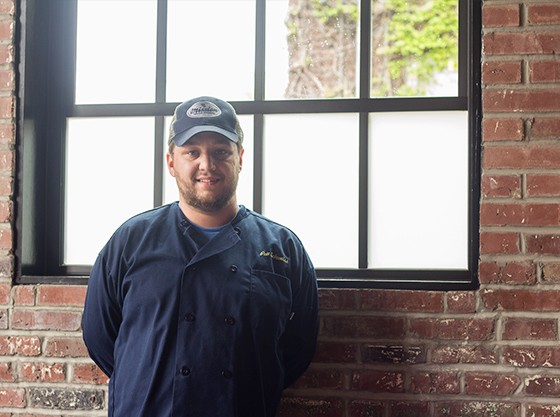 Peter Schweiss clearly remembers the first thing he ever cooked. "Grilled cheese," the commissary manager for Tilford Restaurant Group recalls. "My mom cooked a lot at home. I was always following her around the kitchen asking questions. When I was about nine or ten, she got this pancake griddle and let me make grilled cheese on it. For three weeks that's all we ate."

Schweiss' first foray into a professional kitchen came soon after. "I knew I wanted to work in restaurants, and everyone told me that it was important to start out as a dishwasher," he explains. "I got my work permit at fifteen and immediately got a job washing dishes. I worked as much as they would let me and just watched what was going on around me. It's just how you got into the business."

His focus continued throughout high school, and as soon as he graduated he enrolled in St. Louis Community College at Forest Park's culinary program. During that time, he met brothers Adam and Jason Tilford, who took him under their wing and exposed him to a host of different roles in their kitchens (including Milagro Modern Mexican, Mission Taco Joint and Barrister's).

When the Tilfords decided to open a commissary to service their restaurants, they asked Schweiss to run it for them. By 6 a.m. (until as late as 11 p.m.), he and his team are doing prepwork for the restaurant group's various locations -- juicing fifteen gallons of limes, say, or making sauces and slow roasting pork. One of his biggest responsibilities is known as the "daily grind": manning the masa machine for the tortillas.

"I'd never made tortillas in my life," Schweiss laughs. "Neither had Jason or Adam. When we got the [masa] machine, we were all figuring it out together. They encouraged me to make mistakes as long as I learned from them."

Schweiss is now a professional tortilla-maker, though he still gets a hankering for his first specialty. "I keep a cast-iron skillet on the stove at all times so I can make a grilled cheese whenever I'm in the mood for it," he says. "It's something I always come back to, but it's definitely elevated now -- no more American cheese and white bread."

Schweiss took a break from the commissary to share his thoughts on the St. Louis food and beverage scene, his comfort food guilty pleasure and his "daily grind."

What is one thing people don't know about you that you wish they did? This is a tough one. Most of who I am is out in the open.

What daily ritual is non-negotiable for you? "The grind" -- our daily corn-masa grind for the restaurants. When we have a good morning grind that's a sign it's going to be a good day.

If you could have any superpower, what would it be? The power of flight. This would give me the ability to move from restaurant to restaurant without traffic getting in the way.

What is the most positive trend in food, wine or cocktails that you've noticed in St. Louis over the past year? The growth of the food-truck scene in St. Louis. When the first trucks hit in St. Louis, I was excited to see them but nervous that the trend may not catch. Now that it is here to stay I love to grab lunch off one of the local trucks. It's such a fun way to eat!

Who's the one person to watch right now in the St. Louis dining scene? Josh Poletti of the Libertine. Whenever I pop in there, Josh always brings out some killer item they're working on.

Which ingredient is most representative of your personality? Candied bacon -- sweet and savory and everyone loves it.

If someone asked you to describe the current state of St. Louis' culinary climate, what would you say? It's a blossoming industry -- lots of opportunities for young guys to make a name for themselves. It's also great that the veteran chefs are teaching the young guys and giving them the opportunity to grow.

Name an ingredient never allowed in your kitchen. MSG.

What is your after-work hangout? I enjoy grabbing a beer at the various dive bars around the Hill.

What's your food or beverage guilty pleasure? Porter's Fried Chicken is an absolute guilty pleasure. Growing up in Webster Groves, Porter's was always the go-to for comfort food when we were kids.

What would be your last meal on earth? Jason Tilford's bacon-wrapped chorizo meatloaf with fried onions, roasted poblano gravy, smoked cheddar mashed potatoes and street corn off the cob.