Historic California Do-Nut Co. Will Get a Second Life with New Owner

In 1948, a man named Henry J. Bielefeld founded the California Do-Nut Co. (2924 South Jefferson Avenue). The shop churned out freshly fried doughnuts from a machine that automatically flipped them to the delight of the neighborhood kids.

Eventually, the shop closed. Paper went up in the windows, and then a car lost control and plowed into the building, so boards covered the damage. Then graffiti covered the boards.

But the iconic green "California Do-Nut Co." neon sign remained, and if all goes according to plan, new owner Felinna Love will be able to switch it back on in 2016.

"I'm so in love with the sign," she says. "I was born in San Francisco, so the name is dear to my heart." 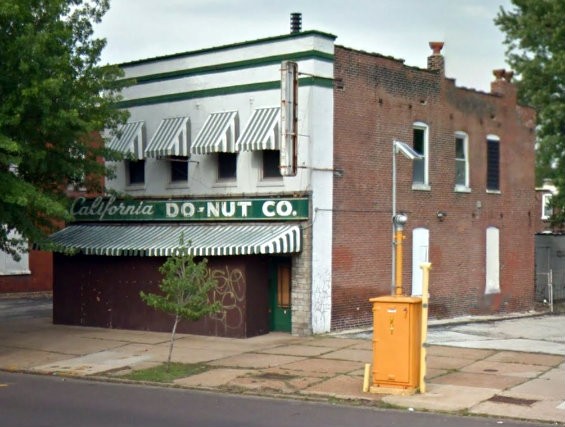 Love currently works for the St. Louis public school system in the human resources department, but she's always loved to cook. She says the birth of her one-year-old son Xavier inspired her to finally pursue her dream to open her own place. When she approached her alderman about possible locations, he mentioned the empty California Do-Nut building. The building's owner agreed to let her lease and gut the space, she says, so long as she kept the historic name.

Work will begin in the next 30 days, she predicts.

"We want to keep the historic look, but we will be painting a couple things," she says. "The sign is going to stay, the awnings will come down."

And that now-famous green color? It'll get a fresh coat of turquoise paint.

Love says she's researched places like Strange Donuts, but is hoping to offer something a little different and more convenient for doughnut-lovers in Benton Park. The shop will specialize in the yeast style and the signature will be a maple glaze. She also plans to offer PB&J and s'mores doughnuts, but the menu is far from final. Love is constantly testing things out with the help of her husband, mother and friends, who are all pitching in on the venture.

She's also hoping to resurrect California Do-Nut without going into debt, and to that end she's started a Kickstarter campaign that's already raised over $2,600. Love hopes to use the money on construction and commercial kitchen equipment, but pledges that even if she misses her goal, the business will go forward with a projected opening date of January 2016.

The public is invited to Love's "Kickstarter Party" on May 23 at the shop for food, drink and music, to help get the word out and see the space. More details to come -- follow California Do-Nut Co. on Facebook for the latest details.

"It's a pretty big change," she says of making the career switch. "Being a parent kind of propels you to go ahead and follow your dream. I kind of felt like there's really nothing holding me back. I don't want to look down the line and say I never even tried."

Contribute to Love's Kickstarter campaign here and learn more about the shop: