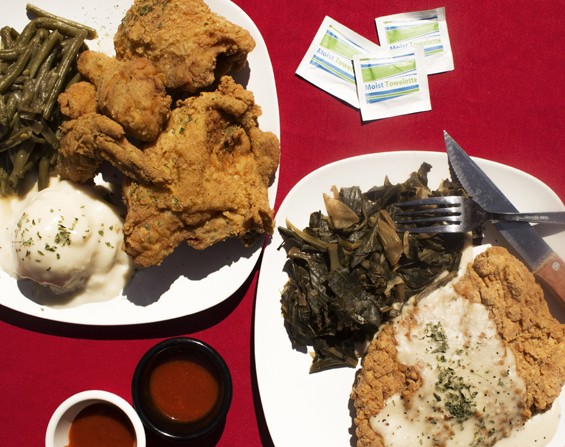 On any given Sunday, beginning around 1:30 p.m., the line for Miss Leon's all-you-can-eat fried-chicken feast begins to form. By 2 p.m., it can stretch well into the Bombers Hideaway parking lot, while those in front clamor for tables and await the Southern-fried extravaganza. It's quite the spectacle, especially considering that the St. Louis fried chicken market is at peak saturation. Then again, how often do you get to eat some of the best Southern food in town cooked by a drag queen named Dieta Pepsi? 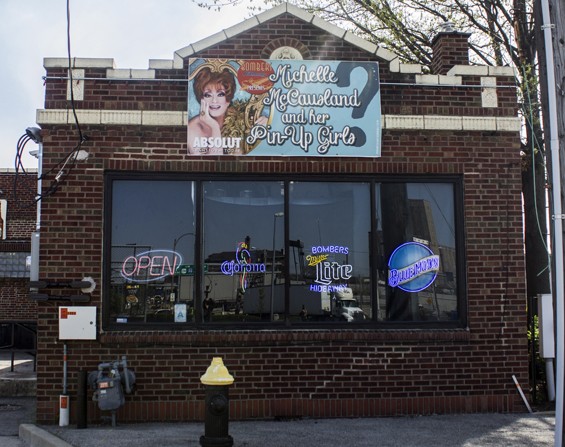 Dieta Pepsi is Leon Augustus Braxton Jr., a mortgage-banker-turned-entertainer and chef who has been cooking down-home, Southern-style food for most of his life. The soul behind Miss Leon's soul food, Braxton first gained a cult following while cooking at Rehab Bar & Grill. There, he served his signature fried chicken to hungry patrons every Sunday until owners Chad Fox and Jim Weckmann gave him a space of his own at their new concept in the Grove, Bombers Hideaway. Braxton used the opportunity to expand his repertoire, fashioning Miss Leon's into a full-service soul-food restaurant.

Those looking for a Miss Leon's sign won't find one -- the restaurant is located within a sprawling gay bar and entertainment complex that hosts everything from burlesque shows to country line dancing. Bombers is huge (it even includes an attached warehouse converted into an event space), and the friendly bartenders are happy to direct guests to the area carved out for Miss Leon's. It's a small, austerely decorated dining nook to the right of the entrance that manages to feels secluded, even though it looks directly into the area behind the bar. Seating is limited to three black vinyl booths and approximately eight tables. Thankfully, Bombers allows the Sunday fried-chicken event to spill into the larger bar space or else the line would stretch to Kingshighway.

Braxton's reputation as a Southern food maven is based on that fried chicken. The version is quintessential soul food: a thin layer of light, crisp batter seasoned with just a whisper of salt and pepper. Inside, the meat is searing hot and juicy, fresh from a precise seventeen minutes in the fryer. It's a simple, well-executed recipe that tastes more like Sunday suppers at Grandma's house than what is served at trendy bourbon bars. Miss Leon's is more than just fried chicken, though. Tender, cornmeal-dusted catfish, simply trimmed with pickles and sliced white onions, gives local fish frys a run for their money. The pork chops are equally satisfying. Miss Leon's serves them either grilled or fried with the same seasoned breading used for the chicken. The coating does not adhere that well to the meat, though this proves to be a minor quibble: It serves as an ideal sponge for sopping up the meat's fryer-seasoned drippings. 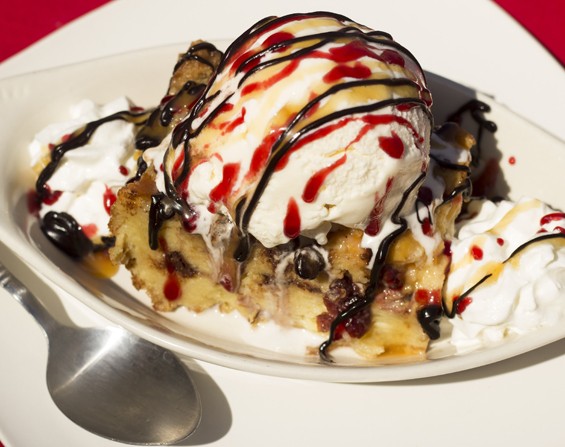 "Old-Fashioned Chicken and Dumplings," described by the menu as "comfort food at its best," lives up to the endorsement. Thickened chicken broth teems with hunks of chicken, carrots, onion and celery. Miss Leon's dumplings are plump and rectangular, like thick, unfilled ravioli. This hearty feast is like chicken soup on steroids.

Because Miss Leon's is known for fried chicken, what follows is a bold statement: The chicken-fried steak is the best thing on the menu. In fact, in the comfort-food category, I can't think of a better dish in town. Two pieces of tender cube steak are pounded thin, coated in seasoned breading, deep-fried and smothered in creamy chicken gravy. The jus from the fork-tender meat soaks into the crispy coating, sinfully mingling with the fryer grease and gravy. My only complaint is that it should be served with a side of aspirin -- you can nearly feel your arteries hardening after one piece of this indulgent meal.

Entreés at Miss Leon's are served with two side dishes. The options are typical of a soul-food place: baked mac & cheese, corn, green beans and fries. I was disappointed that the mashed potatoes are instant. For a place that takes such pride in made-from-scratch cooking, this was a glaring anomaly. Next time, I'll skip them and order a double portion of greens. This mix of collard, turnip and mustard greens had a hefty bit of spice that cut through the rich main courses.

Miss Leon's serves a handful of appetizers, though diners should skip them and go for the entreés. Spicy fried cheese balls, served with a side of ranch dipping sauce, are a forgettable bar staple -- great if you're looking to soak up six rounds of drinks, but not worth the calories when so much good food is yet to come. The buffalo chicken wontons are better, though deep-fried spicy buffalo chicken dip is something best consumed in moderation.

Salads, including a wedge and crispy chicken, are standard save for the deliciously piquant house creamy garlic dressing. Forget gravy -- ask for a side and use it as a dipping sauce for the chicken.

Every main course at Miss Leon's comes with a side of Braxton's sweet and salty cornbread. Topped with caramelized maple glaze, this cakelike accompaniment would have easily satisfied if it were my only dessert. As soon as I saw the bread pudding, however, I was glad I saved room. Chocolate chips, craisins and pecans are interspersed amongst layers of buttery croissants, and the entire concoction is doused with custard. As if this weren't enough, Braxton then finishes the dish with brown sugar, pecans, chocolate sauce and a caramel glaze. It's an unspeakably decadent way to crown a sinfully indulgent meal.

At Miss Leon's, Braxton impersonates no one in his role as a bona fide soul-food chef. As word spreads of his scrumptious Southern fare, that line out the door is bound to grow.