Invented in St. Louis, Huga Bars Are a Different Kind of Snack 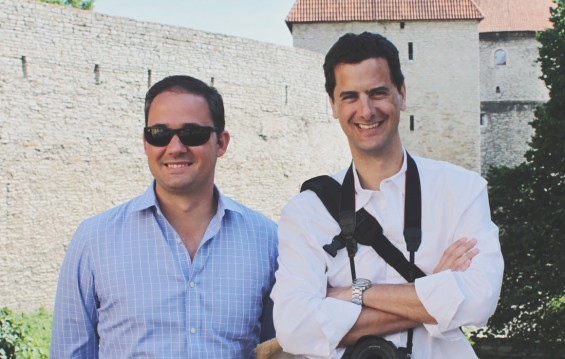 Luis Rivero had an idea for a different kind of snack bar -- something that wasn't as dense as a power bar, but also not as sticky sweet as most granola bars, either.

"All the nutrition bars on the market have very American flavor profiles," he says. "Peanut butter, chocolate chip, apple berry tart. The same old flavors. After growing up abroad, I wished we had a nutrition bar that had some of the flavors I'd grown up with."

In August, Rivero quit his job in DuPont's St. Louis office to work on creating just that. His dream came true last week, when he and brother-in-law Luis Mendoza launched a new line of snacks called Huga Bars.

The bars come in three flavors: almond & honey, hazelnut & chocolate, and dulce de leche, oat and walnut. Each is inspired by a sophisticated European dessert -- a Spanish turrón, an Italian torta di nocciole and a Bohemian torte, respectively. (Future recipes will spread from Europe to other continents.) They're gluten-free and GMO free.

At 150 calories, each bar is meant to be a midday snack or a quick source of energy, not a meal replacement.

Currently the bars are produced on the West Coast (they have yet to find a local manufacturer who could work with their specifications), although Rivero remains based in St. Louis and Mendoza is in New York. For now, they're only available via online shipping. A box with nine bars is $24.95, but Rivero says they're planning to launch a sampler size with free shipping to get customers hooked.

But online marketing is only the first step. Rivero plans to work on getting Huga Bars into grocery stores next.

"This is a new brand with zero brand awareness besides our family and friends," he acknowledges. "We're going to target the online channel first and build a base before going to retail."

Rivero was born in Venezuela and moved to the U.S. with his wife and two young daughters in 2003 to attend business school in Chapel Hill, North Carolina. After that he worked for DuPont in Wilmington, Delaware, for about five years before being transferred to its office in St. Louis.

By then, the family had grown to four children, and two months ago, they added a fifth -- which might make this seem a particularly bad time to quit a corporate gig to launch a new business.

But Rivero is confident his decade-plus experience at DuPont will carry him through. And St. Louis, he's certain, is the perfect place to launch his new company.

That fits right into Huga Bars' philosophy. The bars take their name from the Danish word "hygge", which means enjoying the good life with family and friends.

That's the idea the bars intend to capture: "You can have a Huga moment with your friends and family, or when you're on a bike ride or climbing a mountain and stopping for a snack." But it's not all about the good times -- these bars are meant to get you through the not-so-great ones, too.

"If you're having a bad morning at the office," Rivero says, "you can pause and eat your bar and have a Huga moment right there."

For more information, check out hugabar.com.