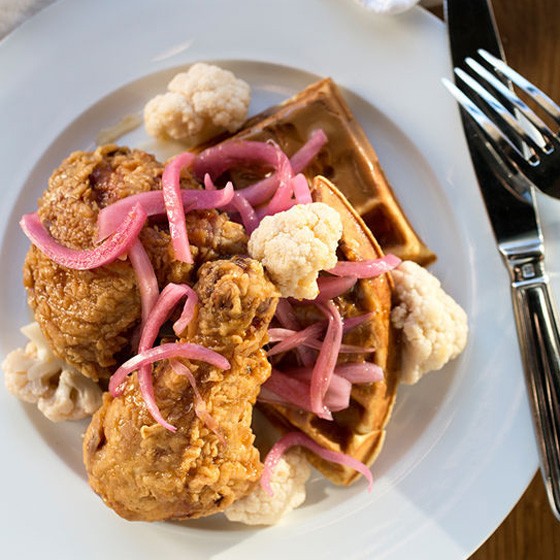 We may have reached peak fried chicken. St. Louis now has multiple prominent, trendy restaurants dedicated to the simple bird, but one has decided to take the popular item off the menu. At least for now. Juniper (360 North Boyle Avenue; 314-329-7696) announced last week that a mainstay on its Southern-twinged menu, the fried chicken plate, will no longer be available. Why? It's been done to death.

"In case you haven't noticed, fried chicken has become a thing of late, well because: fried chicken. We have always been serious about our fried chicken, since the time of our first pop-up, the chicken-themed Le Coq and now more than ever," owner John Perkins said in a statement. "But with all the fried chicken hubbub, it got us thinking, maybe it was time for something a little different. "

The fried-chicken and mashed-potato plate will no longer be on the menu, but never fear: You can still get chicken and waffles as an entrée and the classic fried-chicken dish at Juniper's weekly Monday Meat & Three dinners. As for the aforementioned hubbub, it's been substantial.

The Post Dispatch had a fried chicken March Madness bracket this year. Fried chicken graced the cover of Sauce's March issue. Best Fried Chicken is also a category in our own annual Best of St. Louis issue. So perhaps John Perkins and Juniper executive chef Cassy Vires are right: It's time to take a break. But not completely -- you can bet we'll be at those Monday Meat & Three dinners.