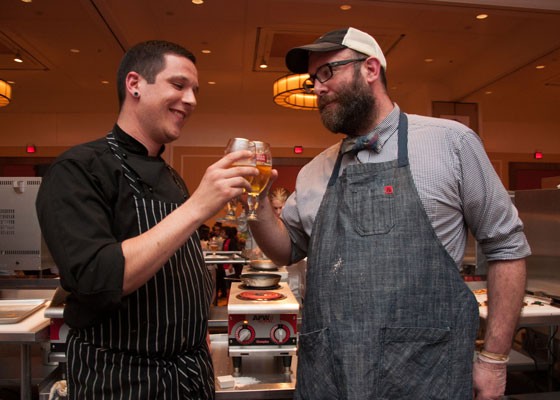 Our night is finally here! The event has once again sold out, but we hope we'll see you tonight at the ninth annual Iron Fork. Gut Check hand-selected dozens of restaurants to join us for your culinary pleasure. There will also be a chef competition judged by RFT restaurant critic Cheryl Baehr and a mixology competition.

We've had some changes to the chef competition due to unavoidable, unforeseen circumstances. Cassy Vires will still be defending Juniper's 2014 title against Sidney Street Cafe's Justin McMillen, but they'll go up against Scott Davis of Three Flags Tavern and Chris DiMercurio of HandleBar (and the late Home Wine Kitchen).

There will also be a mixology competition, and here's the best part: you get to sample the drinks. Thanks to Pernod Ricard, seven local bartenders will be creating original cocktails with either tequila or whiskey. Try drinks from Bobby Pickner from Sub Zero Vodka Bar, Sam Jackson from Gamlin Whiskey House, Mike Baumgartner from Helen Fitzgerald's, Danny Parker from Sanctuaria, Chris Sorgani from Diablitos Cantina, Steve Boulch from Hendricks BBQ and Tony Saputo from Layla.