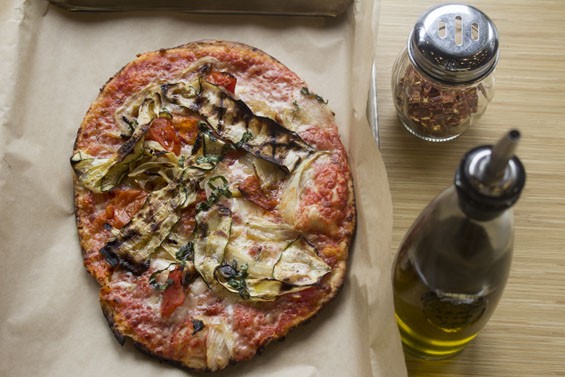 Jim Zimmerman was destined to make great pizza. The Pizzino owner comes from a line of bakers that goes back over three centuries to Lithuania. His grandfather immigrated to St. Louis in the 1800s, and he sold flour out of a tiny pushcart. This humble business would go on to become Cahokia Flour Company, a major player in the industry that, under the younger Zimmerman's watch, would be a force in the artisan baking movement that began in the late 1990s.

The lineage of Zimmerman's craft may come from the Baltic Sea, but his inspiration for Pizzino is Mediterranean. He and his wife, Vicky, have been traveling to her native Italy nearly every summer for the last 40 years. There, Zimmerman developed an appreciation for gastronomy that inspired him to leave the flour business, go to culinary school and open his first professional cooking venture -- a pizzeria.

Pizzino sits in the home of the former Zpizza in Clayton's Wydown neighborhood. The space has a clean, modern feel: red walls, white tables with black and white chairs, and a polished, stainless-steel-appointed open kitchen. Photos of Forte dei Marmi, the Tuscan beach town where Zimmerman and his wife visit every summer, adorn the walls. It's bright and cheery by day, intimate and sophisticated when he dots the dining room with candles on weekend evenings.

Bucking the local Neapolitan trend, this fast-casual pizzeria serves a thin-crust, grilled-to-order version and a thick Roman specialty called pizza al taglio. For the grilled pizzas, diners can either select from a few suggested preparations or customize one from a variety of accoutrements. The base is a thin, golden-brown crust -- crisp enough to provide crunch, but sturdy so that it holds its shape and toppings. These personal-size pies come out slightly oval shaped.

The "Margherita" is a well-executed homage to the classic with crushed San Marzano tomatoes, basil leaves and fresh mozzarella cheese. The "Cantina" satisfies the carnivores with thin slices of Tuscan-spiced steak resting atop a simple tomato-sauce base. For a pop of flavor, Pizzino garnishes with a handful of spicy, whole-roasted grape tomatoes. Reggianito (a hard Argentine cheese similar to Parmigiano-Reggiano) and Gorgonzola cheeses add richness and funk. It's a delicious mix of flavors, but what impressed about this pizza was that the steak remained moist and tender in spite of its time in the 650-degree oven.

I enjoyed the grilled pizzas but can't stop thinking about Pizzino's pizza al taglio. It is here that Zimmerman's prowess as a baker shines the brightest. The thick, focaccia-like crust is baked in a large sheet pan with tomato sauce and assorted toppings, then cut to order in large squares. The focaccia acts like a sponge, soaking up the sauce. Pizzino typically serves three different versions of the dish every day. 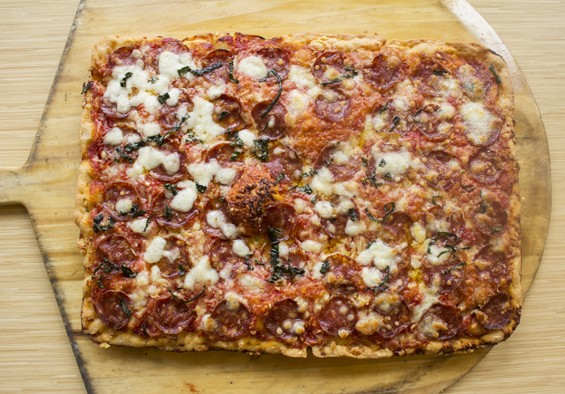 The "Royal" consists of San Marzano tomatoes, caramelized onions, capicola, and a sprinkle of Fontina, Pecorino and goat cheeses. It's sweet, tart, earthy, fatty -- a mix of every flavor one wants on a pizza. The "Hermitage" is Pizzino's upscale riff on a pepperoni pizza, covered in spicy Calabrese sausage. Reggianito and fresh mozzarella cheeses soak up the heat. On the "Forte," tomato sauce, roasted whole grape tomatoes, mushrooms, artichokes, fennel and fresh mozzarella combine for a vegetarian feast. 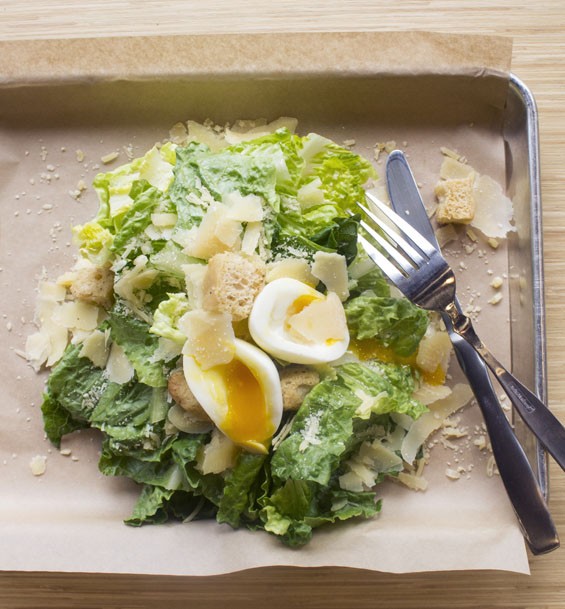 Pizzino has one of the best Caesar salads in town. This deconstructed version starts out classic: romaine lettuce, Reggianito cheese, herbed focaccia croutons. However, instead of adding egg to the dressing, Zimmerman's recipe comes out more like a light anchovy vinaigrette. There's a six-minute boiled egg cut in half and placed atop the salad so that its gooey yolk serves as a secondary dressing. Like every dish I tried at Pizzino, it was perfectly balanced.

It's clear that Zimmerman is having fun at Pizzino. On both of my visits, the staff treated me to creations the owner was playing around with as potential menu items. (I didn't get the impression that this was because I'd been made as a critic, though I could be wrong.) One was a dessert -- a simple Italian cookie called lingue di gatto, or "cat's tongue." This delicate treat was like eating flaky, vanilla-scented butter, a subtle yet satisfying ending to an excellent meal.

Zimmerman proves he has baking in his blood with Pizzino, and the soul of a chef. 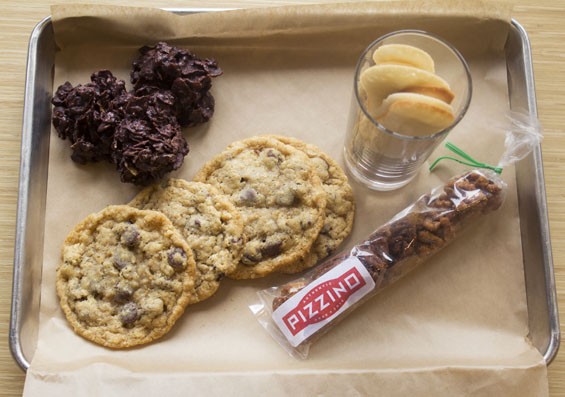