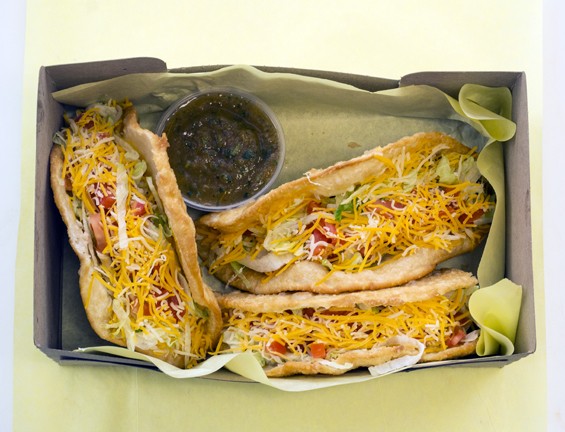 I almost got into a fight at the Fort Taco drive-through. The lady behind me began yelling obscenities out of her window. "Will you hurry up? Just order the whole menu already!" I was about to jump out of the car and tell this woman what she could do with her taco, but settled instead for a nasty look and lingered a little longer just to spite her. I now realize I owe this woman an apology. Having tasted the perfection that is Fort Taco, I understand what a crime it was to come between her and her fix.

This small fast-food gem is the brainchild of Fort Madison, Iowa, expats Gabriel Patino and a silent partner, as well as their communications director Audrey Sosa (who hails from Phoenix). Patino and his partner owned a successful contracting company before breaking into the restaurant business. The philosophy: a Tex-Mex twist on the traditional Mexican food their great-grandparents brought with them when they emigrated to the Midwest to work for the railroads.

This is a drive-through-only restaurant. There are no tables or walk-up service at this austerely decorated former Rally's. Drivers have the option to eat in their cars in the parking lot or take the food with them (and for some reason the restaurant asks that customers specify which). My only quibble with Fort Taco is the lack of seating. There is enough space, either on the grassy median in the lot or in front of the restaurant, for a few picnic tables.

Eating such a delicious, filling meal crammed behind a steering wheel is so dissatisfying. Patino and company make everything from scratch daily. The menu is small, limited to just three items: tacos, enchiladas and tamales. No beans and rice or chips here. There are no microwaves or freezers either, and the tacos and enchiladas are prepared to order -- quite a feat considering I was on my way less than five minutes after ordering. 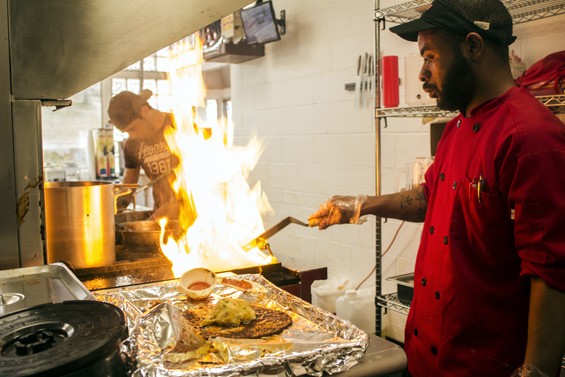 The restaurant's namesake dish stands out because of its excellent shell. The tacos are described as "soft-shell," but if this conjures up images of sad, limp paper-thin tortillas, never fear. The thick flour tortilla is a deep-fried, golden-brown pouf that sturdily cradles its generous contents. Diners can fill them with either beef or chicken. The former is juicy and seasoned with a healthy amount of black pepper; the latter diced thin with flavors of mesquite. The traditional garnish is lettuce, chopped tomatoes and a blend of shredded cheddar and Monterey Jack cheeses.

There's a choice of either a mild, tomatillo-based salsa verde that's heavy on the cilantro, or a "spicy" (I'd consider it a medium heat) smoky chipotle salsa. All the salsas are made from Sosa's family recipes. Onions, cilantro and sour cream are available for a nominal price. For those who complain that $3.85 is too expensive for a taco (the Yelp reviews are riddled with this sentiment), my hearty appetite was sated after eating just one.

I knew Fort Taco's enchilada would be transcendent the moment I opened the black Styrofoam to-go container. The flour tortilla was coated in molten cheese and garnet-red enchilada sauce that had caramelized under a broiler. The rich, slightly tart and smoky ancho-chile-based sauce pooled in the bottom of the container, and mixed with a touch of oil from the cheese and fryer -- a sinful dipping sauce. The base version of this dish is vegetarian, overstuffed with crushed potatoes, cheese and peas. Adding beef and chicken, while increasing the size, does surprisingly little to enhance its richness or flavor: The sauce, cheese and vegetable filling satisfies on its own.

Fort Taco encases its traditional tamales in a corn husk with the precision of an expert gift-wrapper. Opening the package reveals creamy, steaming hot masa and finely shredded chicken, slathered with savory ancho chile sauce. For a dish void of butter, cheese or cream, it is shockingly decadent.

Fort Taco gives diners several combination-plate options but does not offer side dishes nor does it serve dessert. This was fine by me; the only thing I wanted after this satisfying feast was to know how soon I could come back. This time, I'll waste no time deciding what to order: One of everything, please.