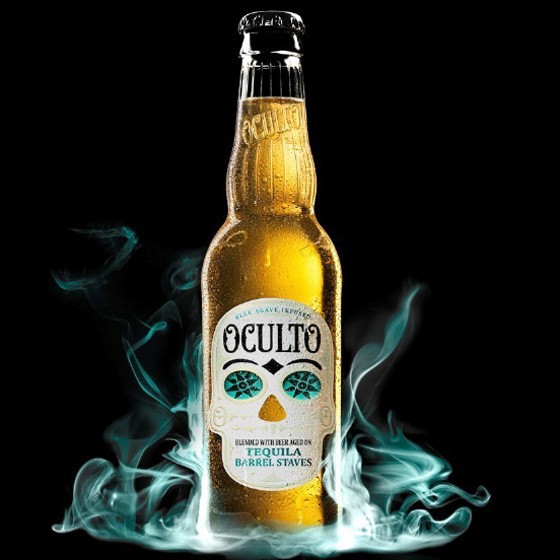 Whiskey- and bourbon-barrel aging is totally the thing now, in both cocktails and craft beer. The process is when you age the spirit or beer in a barrel that previously held say, whiskey, to infuse the contents with that taste. As we've noted before, Anheuser-Busch loves to get in on the craft-beer game, so it's introducing a tequila-barrel-aged lager called Oculto.

The beer launched on Friday, March 13, in keeping with its Day of the Dead-like logo. The bottle apparently features "discoverable elements [that] are embedded in the bottle design, including hidden messages and eyes that appear when cold" and "a tactile feel" for the can.

"Beer drinkers and partygoers are seeking unique, surprising 'mash-up' experiences," A-B's vice president of marketing Jorn Socquet said in a statement. "We worked off untapped insights to bring an innovation that delivers against that expectation. We have a totally surprising brand that revolves around mystery and intrigue -- with a product that hits home with consumers looking for ways to break free from the everyday and find something exciting...an unexpected 'mash-up.'"

The marriage of tequila and beer wasn't dreamed up by Anheuser-Busch, though: Heineken introduced Desperados in Europe more than a decade ago, and it finally hit U.S. shores last year. Dos Equis (owned by Heineken) also has a "lager margarita" called Dos-A-Rita, and there's Dos Equis Azul, which is brewed with blue agave.

Oculto is also infused with blue agave and clocks in at 6 percent ABV. It's designed to appeal to late-night drinkers, though we're not exactly sure why that would work -- maybe because the more drunk you are, the more tequila beer seems like a good idea? "Inspired by and brewed for nightlife," says A-B's official statement, "Oculto combines the social invitation of beer with the exciting nature associated with tequila."

We haven't gotten our hands on any yet, so let us know your thoughts in the comments if you have.