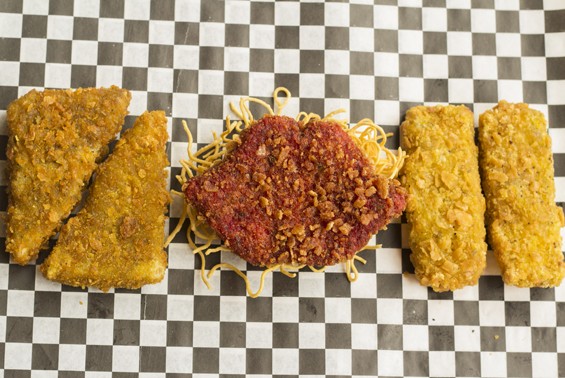 Kim Bond is a vegetarian and Ross Lessor is a meat-eater. They have been together for nearly two decades, but were sick of feeling like one person had to sacrifice every time they went out to eat. That's why their restaurant, Gooseberries, aims to please both dietary persuasions.

See also: Review: Family-Friendly Cabana on the Loop Struggles with the Basics

Their beautifully rehabbed space in Dutchtown South is an inviting corner storefront outfitted with exposed brick, high ceilings and polished wooden floors. Funky artwork dots the walls, and Spam and Chock full o'Nuts cans serve as plastic-ware containers on every table. Gooseberries' eclectic menu is a mix of baked goods, breakfast and lunchtime dishes. The restaurant invites patrons to build their own smorgasbord by making several of its items available as side dishes.

For instance, I selected a wonderfully flaky hand pie, stuffed with mounds of broccoli and cheddar, as an accompaniment to the "Beet Reuben." This vegan take on the classic deli sandwich consisted of perfectly roasted beets -- softened without crossing the line to mushy -- thickly layered on slices of freshly baked pumpernickel. The sandwich is dressed with crisp, brined coleslaw and a vegan 1,000 Island dressing that is creamy enough to fool the keenest palate.

On the carnivorous side is Gooseberries' take on a chicken dinner: the "Bacon Leg," a juicy chicken drumstick wrapped in bacon and roasted. The bacon acts like a pork marinade, infusing the chicken with smoke, salt and fat. A side of delicate, fruity-sweet, tangy barbecue sauce cuts through the richness, and I upped the ante by ordering biscuits and gravy on the side. The crumbly, buttery biscuits were smothered with a rich, housemade sausage gravy -- the restaurant makes its own sausage, and the seasoning blend has a distinct paprika, garlic and brown sugar taste. Its caramelized drippings infuse the gravy, giving it a rust-colored hue. I was speechless with delight.

The restaurant's one slight misstep occurred on "The Chicken and the Egg" sandwich, mostly because of poor bread choice. I opted for the baguette, which was a mistake. Despite its lovely crusty texture, the bread was too massive and crunchy for a sandwich, dwarfing the roasted chicken and bacon. The sliced hardboiled eggs made the sandwich even drier. I couldn't detect the Spanish olives that were supposed to garnish the sandwich -- perhaps they got lost in the baguette somewhere. Next time, I'll save the baguette for butter and jam.

We chose better for the pulled-pork sandwich, selecting the jalapeño cheddar bread. Its slight spice was a nice counter to the sweet pulled pork, and the caraway coleslaw gave the dish a cool crunch. A waffle made a surprisingly good bread substitute on the Gouda and cheddar grilled cheese. Its subtle sweetness, crunchy edges and soft interior were a delicious base for the gooey cheese filling.

If Gooseberries has one signature item on its eclectic menu, it's the "KFT." Short for "Krispy Fried Tofu," the dish is a vegan riff on fried chicken that is seasoned with thirteen herbs and spices -- two more than the Colonel's. The result is a tofu strip with an extra-crispy coating that's so finger-licking good I didn't miss the meat. The side of kale-peppercorn ranch and beer mustard -- while delicious -- was unnecessary for such a flavorful dish.

Bond is the pastry chef at Frazer's Restaurant & Lounge, and it shows. Gooseberries offered two kinds of cookies on my visit: chocolate sage and chocolate chip with pretzels. The former is soft and fudgey with a subtle hint of the earthy herb that provided depth. The latter added a tasty salted crunch to the traditional chocolate-chip cookie. Both demonstrate Bond's pastry prowess.

It was refreshing to order a pulled-pork sandwich with a side of fried tofu and have both treated with the same loving care -- Gooseberries proves there's a place for anyone at its table.