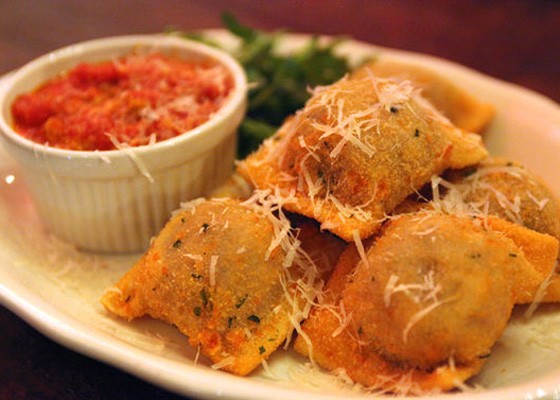 Last week, Gawker Media's sports blog, Deadspin, announced for the millionth time that it hates the Cardinals (whatever) and, for some reason, that "St. Louis-style pizza is a war crime." Yesterday, its food blog, Kitchenette, went on a deranged rant about the Wikipedia page for "Saint Louis Cuisine."

Of course, nobody considers Wikipedia a bastion of unassailable facts, and we will concede that "Saint Louis Cuisine" is a strange entry (someone has since changed it to "St. Louis Cuisine"). As of March 11, when Gawker posted its ridiculous diatribe, the page included information on toasted ravioli, the Hill, St. Louis-style pizza, Provel cheese, St. Paul sandwiches, St. Louis barbecue and the food at the 1904 World's Fair.

We have issues with the entry's information ourselves. It seems the page's main editor is a man named Kaz Vorpal, a Web developer who does live in St. Louis and is also one of the top editors for the Ron Paul Wikipedia page. (Do with that what you will.)

But from the look of Gawker's article, the writers must be surprised that us country bumpkins can even read. The Proust-reading, monocle-wearing, pipe-smoking authors (we assume) question how many St. Louisans have even been to New York or Boston, that bastion of high culture. We would guess that none of these people have eaten any of the aforementioned foods, much less have been to St. Louis. But come on, guys, that's besides the point when you're trolling this hard.

"I'm laughing really hard at Wikipedia's 'weasel words' citation note," writes C.A. Pinkham. "Like they have any other type of words in St. Louis?"

ZING! You're right, we're all so weaselly. It continues:

I eagerly await the enraged yet smugly superior comments which will no doubt point out that St. Louis is gosh-darned awesome and doesn't need anyone else's validation while simultaneously telling me off for being so mean. St. Louis: the only city in America with both a superiority and an inferiority complex.

Some enterprising St. Louisans have made changes to the page since yesterday, but we have a lot of work to do. This Wikipedia page is the travesty, not St. Louis cuisine -- we're calling for local food lovers to improve the entry. In the meantime, we're pretty sure this is what's going on in the Gawker offices: