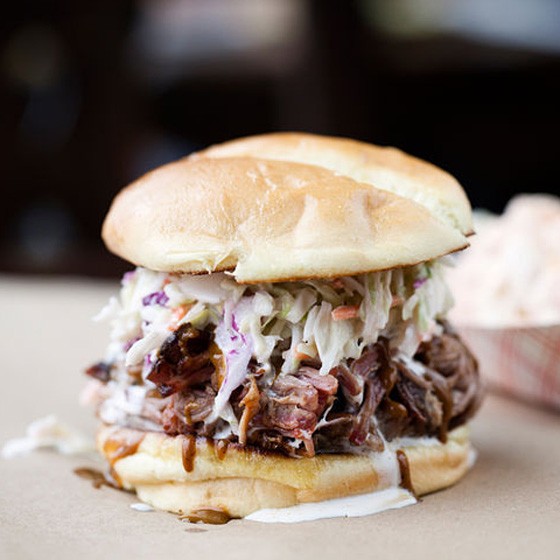 Sugarfire Smoke House (9200 Olive Boulevard, Suite 114, Olivette; 314-997-2301) has announced it will be opening its third location in the past year, bringing the total to four (five, if you count Sugarfire Pie). The barbecue powerhouse is joining the fun in the MX District, which is also the site of Gerard Craft's upcoming restaurant Porano.

At this point, owner and chef Mike Johnson may just be the most prolific restaurateur in St. Louis. In addition to his growing Sugarfire family, he's had a hand in Boogaloo, Cyrano's, BARcelona and the late Roxane, among others. Sugarfire's St. Charles location opened last April, followed by O'Fallon in May and Sugarfire Pie in October. The original joint in Olivette opened in September 2012.

Fans are delighted by the barbecue, but other items such as the cheeseburger (which won ALIVE's Top Chef Burger Challenge last summer) and the sugar-coma-inducing pies keep people coming back for more. The MX Sugarfire will have the same menu as the other three, but with an additional bar space to cater to the downtown crowd.

The new location will be at 605 Washington Avenue next to the future National Blues Museum, Robust Downtown, Pi Pizzeria, Snarf's, and it's two blocks from the Edward Jones Dome, which already serves Sugarfire Smokehouse. Johnson is projecting a September 1 opening.

"I've owned and operated nearly a dozen restaurants in greater St. Louis but have always wanted to bring a concept to downtown St. Louis," Johnson said in a statement. "We're thrilled to work with Amos Harris of the MX District and have Sugarfire be part of downtown's renaissance and bring our style of barbecue to the city's core."