Review: Family-Friendly Cabana on the Loop Struggles with the Basics 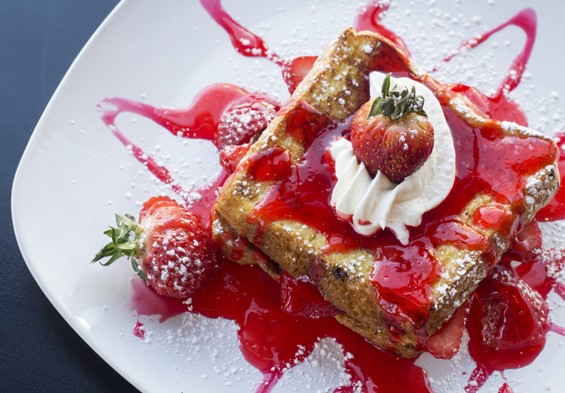 Perhaps Cabana on the Loop was ill-fated from the start, the victim of larger, metaphysical forces: the location curse. St. Louis has its share of spots that cycle through restaurant after restaurant: the old Coco's on Lindbergh in Frontenac, the corner of Manchester and Sutton in Maplewood that most recently housed Blind Tiger. Add 6100 Delmar Boulevard to that list. Following in the footsteps of H2 Horseshoe House and Modai Sushi Lounge, husband and wife Wendell Bryant and Latoshia Morrow chose this storefront as the spot to plant their restaurant dreams: a family-friendly breakfast and lunch eatery (with dinner service on weekends and by reservation). Bryant says he and Morrow couldn't take a vacation, so they styled it to look like one. But after visiting Cabana on the Loop, it was quickly apparent that there is trouble in paradise.

Instead of the bright colors one might imagine from such a theme, the walls are painted chalkboard black and covered with multicolored graffiti from the restaurant's patrons. (Whimsical, yes. Island-like, no.) Perhaps the most bizarre element is the large bar that sits smack-dab in the middle of this alcohol-free restaurant. Bryant and Morrow did the best that they could with this feature, converting it into a cereal bar with hanging displays of assorted cold breakfast cereals and toppings for diners to mix and match. Despite their creative efforts, the concept feels miscast.

The breakfast side of the menu is the restaurant's stronger suit, though it is not without its share of problems. The shrimp and grits were fair. The well-cooked shellfish were tossed in mildly spiced Cajun butter with small pieces of turkey bacon for seasoning. I would have preferred the grits to be creamier, allowing the sauce to soak in and infuse them with flavor. The biscuits and gravy had a rich peppery taste -- had it not been advertised, I might not have noticed that the kitchen uses turkey sausage in place of the traditional pork. The gravy was rich and creamy, in contrast to the hard and dry biscuits.

I question whether the "Cabana Waffle Awesomeness" was made from a packaged mix (the cake had a telling taste and spongy texture), but it was cooked to a golden brown and topped with sliced bananas, pineapple, strawberries and a dollop of whipped cream. I quibble with calling the French toast "stuffed" rather than "topped" with strawberries and cream cheese, but it was a tasty dish either way. The fluffy Texas toast was beautifully griddled and topped with powdered sugar, strawberries in syrup and airy whipped cream cheese.

The lunch service stumbled. I'm perhaps most disappointed in the "Cabana House Cheesesteak" because it looked so promising on the menu: thinly shaved beef, melted provolone, peppers and onions on griddled sourdough. The meat was so overcooked it was crunchy. The Reuben suffered the same fate: The corned beef was the texture of jerky, and it was served without sauerkraut. In its place were bell peppers and Swiss cheese; 1000 Island dressing finished off this disastrous interpretation.

Even the burger was a disappointment. It arrived, open-faced -- a small, over-well-done patty dwarfed by its bun and accoutrements. Not even mayonnaise and ketchup could reconstitute the dry, leaden beef puck. The honey-glaze onion rings on the side, however, were golden-battered beauties that tasted like a combination of onion rings and funnel cake. They were the highlight of the meal.

For all its flaws, the food was only part of Cabana on the Loop's problems. On both visits, it took a painfully long time to get our food (45 minutes on the first trip; 35 on the second), even though the dining room was almost empty. This was not a service problem -- our waitress could not have been more pleasant and attentive. Instead, it hinted that there is something fundamentally wrong in the kitchen. Whether it has been cursed by the restaurant tiki gods or simply suffers from poor execution, Cabana on the Loop has a ways to go toward paradise.