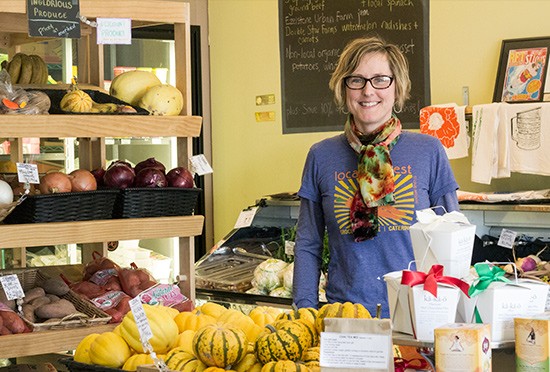 Maddie Earnest had planned to spend her life working in social services -- she just didn't know that was going to be as a neighborhood grocer. "I have a MSW in social work," the Local Harvest Grocery <em>(3108 Morgan Ford Road; 314-865-5260) co-owner explains. "I was a social worker, but I always believed in local farming, had a CSA membership, grew up gardening. After helping my business partner set up the Tower Grove Farmers' Market, we decided to open Local Harvest. Sometimes we joke, "What were we thinking?"

What they were thinking was that St. Louis needed a place where people could have access to local, sustainably and ethically raised products in a brick-and-mortar setting. "We envisioned Local Harvest as a seven-days-a-week farmers' market," Earnest says. "We also wanted to be a place where local farmers who don't do the markets could sell their goods."

Eight years later, Earnest and team are going strong in their south city location, preparing to celebrate the ten-year anniversary of the Tower Grove Farmers' Market with an "Eat Local Challenge." "We want to reinvigorate the idea of eating locally by challenging people to do so for 30 days," Earnest explains. "Hopefully we can bring in new people as well and help them think about where their food comes from."

Earnest took a break from manning the store and planning the challenge to share her thoughts on the local food scene, why she gave up being a vegetarian after nearly two decades and how she is much more like a carrot than okra.

What is one thing people don't know about you that you wish they did? I'm a pretty open person, so if we are friends, you likely know a lot about me. I love to read and I love underdog and true story sports movies. I don't watch or follow sports, but love sports movies.

[Earnest also says that many folks would be surprised to learn that she used to be a vegetarian for eighteen years, but she gave it up when she opened Local Harvest Grocery. "My main issue with eating meat was where it came from and how it was raised," she explains. "Those issues aren't there with the meat we sell, and I sort of felt that I should stand behind all of my products."]

What daily ritual is non-negotiable for you? In the winter I love to get up early and take a hot bath. Also, every night as I'm going to sleep, I go over all the things I'm thankful for about the day. It helps me go to sleep more relaxed and grateful. It's my dream to make time every day for meditation -- but so far I haven't been able to keep it up daily.

If you could have any superpower, what would it be? This is something I've discussed at length with my 7-year-old and it's still a tough question. I'll go with the ability to fly. It's pretty fun in my dreams. In case you are wondering, my son wants to have the power of telekinesis.

What is the most positive trend in food, wine, beer or cocktails that you've noticed in St. Louis over the past year? At Local Harvest, we have a lot of customers who are very engaged in making their own beer, fermented foods, cheese, broths, etc. It's fun to be a part of that community and hear about their adventures with food. I sound so Portlandia. Definitely there is more interest in fermented food, and it's exciting to see it showing up on menus around town.

Who is your St. Louis food crush? I get farmer crushes. They are some hard working folks and I find them to be some of the most optimistic people. Even after major losses in droughts or rains, they seem to already be planning how the next season or crop will be better.

Which ingredient is most representative of your personality? Okra. [On second thought, Earnest decides she's more like a carrot. "Okra is my favorite food," she says. "It's really prickly though. I don't think I'm prickly. Carrots are simple and rooted in the ground. I think that describes me more accurately."]

What is your after work hangout? My house.

What's your food or beverage guilty pleasure? I like chocolate long john's -- plain, not filled.

What would be your last meal on earth? I love Indian food. I would want samosas, a korma dish, spinach with paneer cheese and a sweet rice pudding for dessert. I love a good Indian buffet.