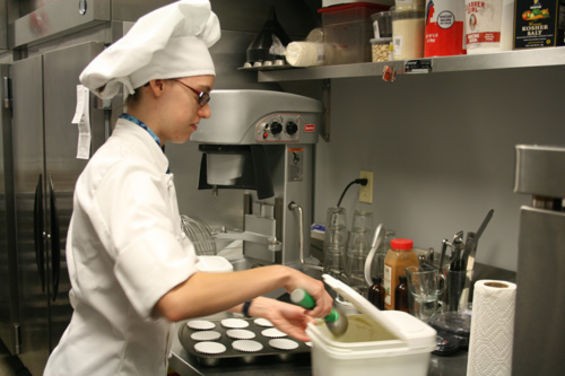 Stephanie Fischer seriously considered pursuing a music career instead of a culinary one. "I knew I didn't want an office job," the Comet Coffee (5708 Oakland Avenue; 314-645-7158) co-owner and pastry chef explains. "I played piano and percussion -- the xylophone. I don't know why I chose pastry instead. I just did."

Fischer's calling into the kitchen came early. "Baking was always a hobby when I was younger," she says. "My mom wasn't good at it, so when we had pastries, I was the one who fixed them." She eventually turned pro, enrolling in Forest Park's Culinary Arts program, but it was her part-time job while in school that led her to Comet Coffee. While working at the Kaldi's Coffee bar at the Des Peres Schnucks, Fischer met her partner, Mark Attwood.

There, the pair discussed the lack of specialty coffee in St. Louis and mused about opening a place of their own. "This was before Sump Coffee," Fischer explains. "We didn't want to roast our own because we wanted to feature coffees from all over the world, kind of like a wine bar." Their plan came together quicker than they imagined, and after a mere eight months, the pair found themselves as owners of one of the city's most respected coffee shops -- and bakeries.

Fischer took a break from making her famous chocolate chip cookies to share her thoughts on the St. Louis food scene, her guilty pleasure and what's never allowed in her kitchen.

What is one thing people don't know about you that you wish they did? I'm generally a pretty private person. I usually let people know everything I want them to know about me. I guess a lot of people don't realize I'm interested in dietetics since I only make indulgent food.

What daily ritual is non-negotiable for you? Morning coffee.

If you could have any superpower, what would it be? I would love to be able to experience a book just by touching it, and instantly be able to understand and practice the subject. Like if I picked up a book on glass blowing, then I would be able to do it myself.

What is the most positive trend in food, wine or cocktails that you've noticed in St. Louis over the past year? There's a ton of ice cream and gelato happening here. We've had Serendipity for a while now, I Scream Cakes, gelato at Pastaria and now Jilly's, and Ices Plain & Fancy. Soon we'll also have Jeni's and Clementine's.

Who is your St. Louis food crush? Heather Stone has been making excellent dishes at Taste. I'm always excited to try something new from the menu.

Who's one person to watch in the St. Louis dining scene? Stephan Schubert [River City Casino].

Which ingredient is most representative of your personality? Sour cream.

If someone asked you to describe the current state of St. Louis' culinary climate, what would you say? It's adventurous and specialized. Culinary entrepreneurs are pursuing specific interests, whether that's a certain cuisine, butchering, distilling, cheesemaking, or even just processing more ingredients from scratch instead of buying convenience products. Some of this hasn't quite made it into St. Louis yet, but we have access to it here. And these businesses wouldn't survive if people weren't interested.

What is your after-work hangout? I like to go home to relax, but sometimes I'll go to the Good Pie or Taste if I know I can beat the crowd.

What's your food or beverage guilty pleasure? Any Indian food. I'll get cravings for papadum and buy it to snack on throughout the day.

What would be your last meal on earth? Assorted Salume Beddu cured meats with cheeses and nuts, followed by pirozhki and borscht, then elderflower ice cream for dessert.