About a year ago, Ben Poremba was sitting in the middle of his Mediterranean wine bar Olio when he had a revelation. "I think I'm going to open a fried-chicken place." It seemed like an odd venture for Poremba, an Israeli who grew up in Morocco. His employees certainly thought so and laughed him off when he made his proclamation.

The next thing they knew, the chef was taking off on multi-day adventures around the country to learn everything he could about this most American of dishes. Whereas Olio represents the food he grew up eating and Elaia is a nod to the refined, classic techniques he learned in cooking school, Old Standard is Poremba's homage to his adopted American home.

See also: Pizzeoli Has Perfect Neapolitan Pizza Down to a Science: Review 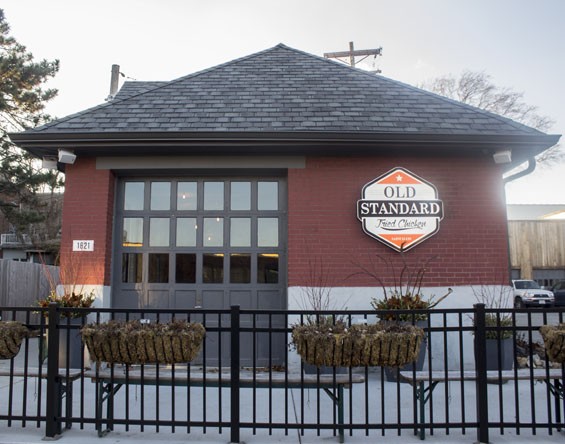 Built in a converted horse stable, Old Standard emulates a casual chicken shack (once the restaurant's working name). Exposed plywood beams give the feel that one is dining in a barn still in the process of being raised. Whiskey barrels serve as bar tables, Edison bulbs hang from the ceiling, and rustic arrangements of dried flowers and sprouted cotton add to the Southern charm.

Fried chicken is Old Standard's only entrée, and though the prices are about triple what one would find at a classic chicken shack, Poremba is not serving just any old bird. They're ethically raised Amish poultry from a small family farm in Indiana. And his obsession with preparing the perfect fried chicken does not end with the sourcing. He tinkered with the brining process like a chemist and invested serious cash into a special pressure fryer that locks in moisture.

Old Standard offers whole, half or à la carte orders of its chicken. The full bird is served in a clay-colored ceramic box, brimming with enough food for two plus leftovers. As is typical of an Amish bird, the legs and thighs are large and meaty while the breasts are smaller than their factory-farm cousins. Cooking it in a pressure fryer results in juicy, succulent meat while the skin remains light, crispy and not the slightest bit greasy. The seasoning blend on the breading has a touch of warm, peppery heat; for those who prefer their chicken spicy, Old Standard offers a vinegary Louisiana hot sauce on the side. It's a classic, impeccably executed version of an all-American dish. 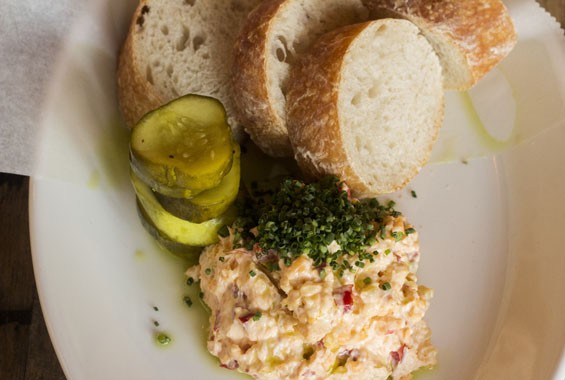 Poremba also offers a number of Southern-influenced snacks and trimmings. House-pickled micro vegetables and gherkins adorn "Charlotte's Mother's Dressed Eggs" (many of the dishes are named after the people Poremba met on his travels or taken from the names in Southern cookbooks). The crisp, tart vegetables cut through the creamy mustard-infused yolks -- an elevated take on deviled eggs. Naturally, Poremba had to put hummus on the menu, though Old Standard's version is made with boiled peanuts instead of chickpeas. Smoked chiles, pickled jalapeños and chive oil added flavor to the otherwise plain dip. Old Standard's signature appetizer is "Mrs. Edna Mae's Pimento Cheese," a classic Southern appetizer of creamy cheese dip speckled with chunks of piquant red peppers and horseradish pickles. A few slices of crusty bread are served alongside for dipping, though some of my companions went straight in with their forks.

My favorite snack at Old Standard -- actually, my favorite item there, period -- was the smoked whitefish croquettes. Flakes of sweet, smoky fish are whipped with creamy potatoes, lightly breaded and fried into heavenly little fritters. The filling is so light and airy it's like eating a savory cream puff.

Side dishes include sweet braised greens, Asian-style shredded coleslaw, and a sweet potato halved and covered with brûléed marshmallows. The creamed corn is especially noteworthy -- the sweet kernels are tossed in a rich, dill-infused sauce. The mashed potatoes stood out for their fluffy, buttery texture. One major flaw, however, was the fact that I pulled out three small shards of bone from the accompanying chicken gravy.

Old Standard's bread board includes two styles of cornbread ("Real" and "Yankee"), and flaky and drop biscuits, served with a choice of three out of seven kinds of jams, jellies or butters. We ordered the butterscotch-like maple pecan butter, the lemon honey butter (a perfect complement for the cornbread), and some orange marmalade.

The breads would have made an excellent dessert, but thankfully I saved room for the apple cobbler. The cinnamon-spiked, softened apple slices, topped with a brown-sugar crumb coating, were excellent on their own, but I couldn't resist adding a scoop of rich bourbon ice cream. Served with a whiskey cocktail, this was a perfect ending to the meal.

Poremba's Old Standard nails classic Americana. He may have grown up in the eastern Mediterranean, but he cooks up fried chicken like an old Southern grandma.