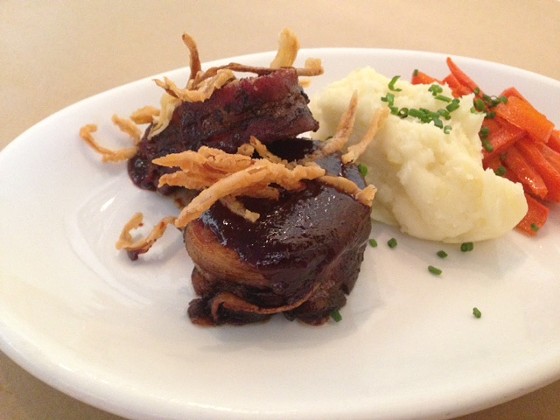 The aroma of smoky bacon wafting out of Farmhaus (3257 Ivanhoe Avenue; 314-647-3800) on any given Wednesday afternoon announces a glorious event: meatloaf day.

The Lindenwood Park restaurant, headed by Kevin Willmann, is known for its self-described "edgy" takes on Southern and Midwestern cuisine. At night, the small dining room buzzes with guests eager to sample the acclaimed chef's upscale fare. During weekday lunches, however, the place transforms into a casual eatery, serving up daily blue plate specials that look and taste like Grandma's home cooking.

At $10, the hearty lunch -- complete with salad and a glass of tea -- is a bargain. On meatloaf Wednesdays, it's a steal. Willmann's version of the down-home dish has a distinct barbecue flair: The moist, beefy loaf is flecked with onions, wrapped in bacon and slathered with Pappy's Smokeouse's rich barbecue sauce. The bacon fat, beef and sauce caramelize, creating a mouthwatering, gooey glaze that will haunt one's dreams -- at least until the following Wednesday.