Pizzeoli Has Perfect Neapolitan Pizza Down to a Science: Review

Pizzaioli is the Italian word for pizza-maker. It's a literal translation, but it's a bit like calling Salvatore Ferragamo a guy who makes shoes. To understand the essence of the word, one need not travel any farther than the corner of Allen and Twelfth Street in Soulard. There, Scott Sandler has opened Pizzeoli (an Americanized spelling of the term), an edible love poem to Neapolitan-style pizza. The former real-estate broker had been an at-home baker for years, experimenting with breads and obsessing over the perfect pizza dough. When his real estate career hit a rough patch last year, he decided to follow his dream of opening a pizzeria. Sandler enrolled in the Associazione Verace Pizza Napoletana's training program in California to further hone his craft.

Talking to Sandler, however, you'd think he taught the course. This man is serious about pizza. When he's not in front of the oven with peel in hand, he can be found walking around Pizzeoli's tiny dining room, espousing the virtues of yeast and why it's important to use a particular style of mixer to work the dough. He approaches his craft with a precision that borders on obsession, and his customers reap the benefits. 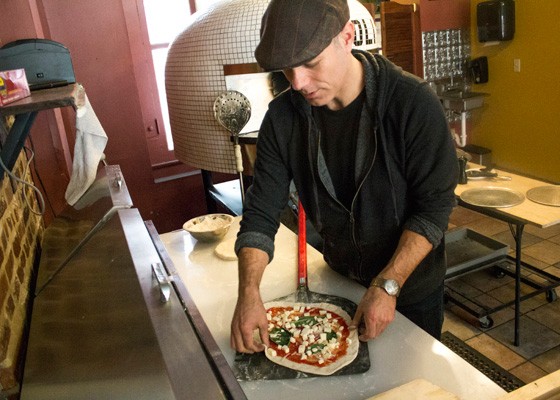 Pizzeoli occupies a tiny, shotgun-style storefront on the first floor of one of Soulard's historic buildings. Signaling how seriously he takes his pies, the authentic, wood-burning, Neapolitan oven takes up roughly a third of the restaurant's precious real estate. Smoke and flames dance underneath its black-and-white-checkered dome, casting a warm glow around the room. The remainder of the space is divided equally between a small bar and a six-table dining area. A few vintage travel posters of Naples dot the walls, and some Hindu-inspired décor, including a photograph of Sandler's guru, is scattered about the interior.

Sandler makes his dough fresh daily with finely ground "00" domestic flour (he's decided it's better than the Italian version) and a little bit of yeast. After it's cooked in the 900-degree wood oven, the result is a pale gold crust speckled with small black dots of char that looks like a cheetah's coat. Toppings are simple -- and entirely vegetarian -- ranging from the classic Neapolitan pies to some of Sandler's own creations. The Margherita, the only true way to measure a Neapolitan pizzeria's authenticity, arrived perfectly on point. Crushed and salted pear tomatoes, basil leaves and pearls of fresh mozzarella topped the impeccably cooked crust. I was equally impressed by the "Affumicata" pizza. The sauceless pie was brushed with olive oil and sprinkled with halved cherry tomatoes. Smoked mozzarella is melted over the top (affumicata means smoke in Italian), and its flavor mingled with the char on the crust for a pleasantly bitter taste. Peppery arugula blanketed the dish after it came out of the oven and provided a final, pungent punch. 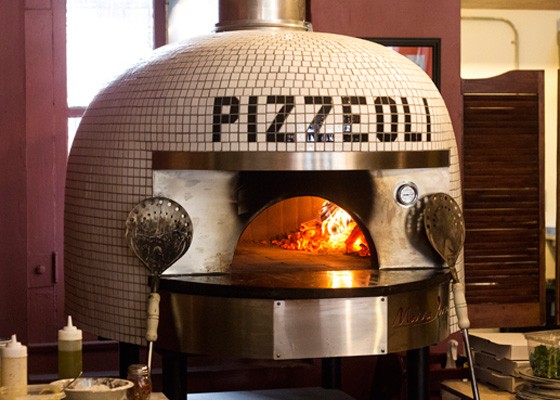 Those missing meat on their pizza should opt for the "Fungi." I chose the white sauce (red is also available) as the base for this vegetarian version of a meat-lover's pie. A generous portion of Shiitake, crimini and yellow trumpet mushrooms covered the pizza, and some fresh thyme complemented their earthy flavor. Sandler also crumbles fennel-spiked vegan sausage on top, adding spice and earthy depth to this hearty pie. This protein substitute makes an appearance on the "Soulard" as well -- a vegetarian version of a sausage pizza. Molten mozzarella dapples the center, and chili flakes add heat to the crushed tomato sauce. Coupled with the spiced "sausage," it's a pleasantly piquant dish.

I was very impressed by the vegan "Baba." Amidst the crushed tomatoes and fresh basil, Sandler placed dollops of housemade cashew ricotta. The cheese substitute would not fool anyone, but its mark of success is the flavor. The ground nuts take on a shockingly creamy texture when mixed with olive oil that is akin to almond butter. This avowed carnivore would order it again without hesitation. 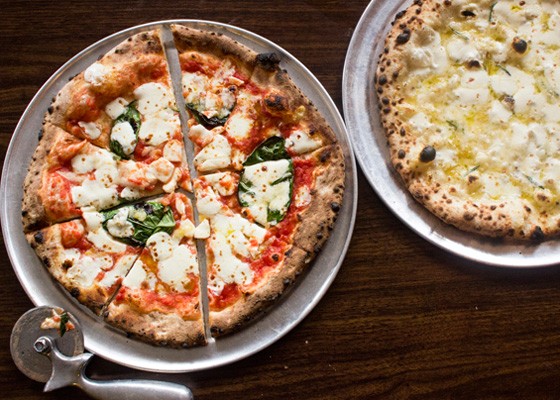 My favorite pie at Pizzeoli is the "Bianca." It's so simple -- just béchamel, olive oil, garlic, mozzarella and rosemary -- but the combination of flavors is ethereal. The creamy béchamel and cheese meld together to form a rich, gooey sauce. Large chunks of fresh garlic turn the pie into a wealthy person's cheesy bread. What draws it all together, however, is the fresh rosemary. When kissed by the oven's flames, this fragrant herb perfumes the pizza from crust to middle. A well-executed Margherita pizza is hard to beat, but the "Bianca " is the best item on Pizzeoli's menu.

Sandler is a pizza-maker with the heart of an artist and the mind of a scientist. With Pizzeoli he proves that the two sensibilities make perfect sense on the plate. 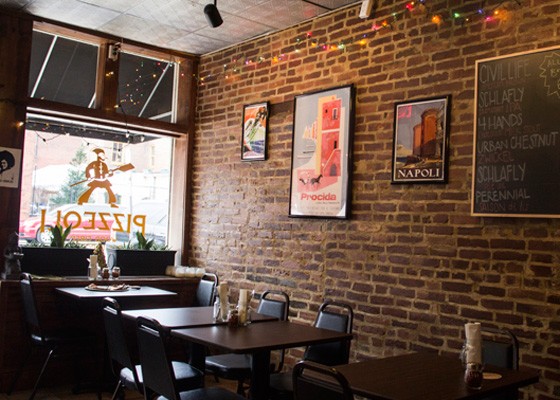