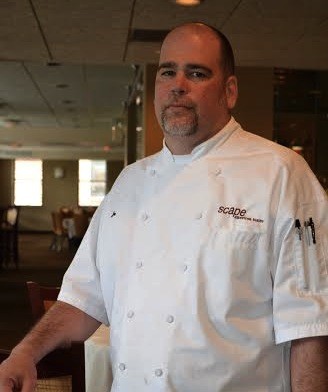 Joe Everett's grandma was skeptical at first about his enthusiasm for being in the kitchen. As a little boy, Scape American Bistro's (48 Maryland Plaza; 314-361-7227) executive chef would pester her while she was hard at work whipping up her Italian specialties -- sampling everything and always in the way. Eventually, she stopped chasing him out and began teaching him, instilling a love for food that he just couldn't shake.

Everett, a native of Florida, has worked everywhere from small mom-and-pop outfits to Disney before landing at Scape American Bistro in the Central West End. Middle America is quite a change from the coast, but he hasn't let his landlocked status quash his passion for seafood. "Seafood here is easy," Everett says. "I use a company that gets me a daily delivery from Chicago O'Hare [Airport]. If it's on my menu, it was swimming yesterday."

Everett took a break from the kitchen to share his thoughts on the St. Louis dining scene, his love for bourbon and his distaste for a very St. Louis-style ingredient.

What is one thing people don't know about you that you wish they did? I'm pretty much an open book. I grew up in Florida so I'm used to being on the beach. Most people don't believe how laid back I am when I'm not at work.

What daily ritual is non-negotiable for you? Walking into the restaurant saying, "Hi," and checking in with everyone.

If you could have any superpower, what would it be? Time travel.

What is the most positive trend in food, wine or cocktails that you've noticed in St. Louis over the past year? People seem to be more educated about food and wanting healthier options.

Who is your St. Louis food crush? I love Sugarfire Smoke House, so Mike Johnson.

Who's the one person to watch right now in the St. Louis dining scene? I like what Brian Moxey is doing with the bar menu at Perennial.

Which ingredient is most representative of your personality? Wasabi -- I start off tame then bring the heat...ha.

If someone asked you to describe the current state of St. Louis' culinary climate, what would you say? Growing. You see a new restaurant opening up every day bringing new flavors to St. Louis. It keeps pushing everyone to take it up a notch.

Name an ingredient never allowed in your kitchen. Provel cheese.

What is your after work hangout? My couch with a glass of bourbon.

What's your food or beverage guilty pleasure? Bourbon, chocolate chip cookies and Scotch, not necessarily together.

What would be your last meal on earth? My grandma's gnocchi and red gravy.