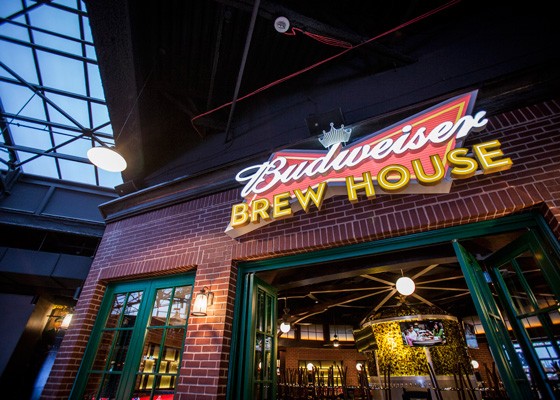 For the first time ever, Anheuser-Busch has brewed a beer created by a local home brewer. A limited amount will be available this Sunday, January 18, for tasting at the Budweiser Brew House at Ballpark Village (601 Clark Avenue; 314-345-9481). We talked to winning brewer Dave McWilliams and contest mastermind Tony Caradonna, beverage manager at Ballpark Village, about why this beer deserved to go to the big leagues.

Anheuser-Busch asked St. Louis' seven home brew clubs to hold their own internal contests for an American-style IPA. Six of them chose winners, which competed against each other for the chance to be brewed by the beer giant. The judges were A-B's own tasting panel, which taste tests beers from the company's international range.

"It is clean, it is very aromatic, it is a beautiful linger. I like to use the world 'linger,' because 30 seconds after you taste Dave's beer, it's still kind of coating the tongue," Caradonna says of McWilliams' winning IPA. "It's a gorgeous beer from start to finish -- from the aromatic to the initial taste to the linger, that's really what it comes down to. It's the complete feel."

McWilliams first began brewing his own beer in the late 1980s with an old friend who was working as a microbiologist. He took it up in earnest again around ten years ago and made beers from home brewing kits with a group of friends. After a few years, he was entering festivals and competitions.

McWilliams says since then, he has met many more fellow home brewers, discovered home brewing clubs (he's currently a member of Garage Brewers Society and STL Hops) and gained a lot more knowledge. He has been perfecting the recipe for his winning American-style IPA -- which uses Golden Promise pale malt, Simcoe hops and a yeast called 1056 -- for a while now.

"It was a win-win situation. Ballpark Village hosted the event, Budweiser was the sponsor and the home brew community got to be featured," Caradonna says. "Home brewers have always been part of beer festivals all over town, but never to this degree -- [here] they are the main event. It's just really cool for a first-time event."

Eight kegs of McWilliams' IPA will be tapped on Sunday afternoon from 1 to 5 p.m. for complimentary sampling on the second floor of the Budweiser Brew House. Caradonna doesn't anticipate having any left over, but it will be available until it runs out.

"I made a brew that was clear, malt balanced and highly aromatic. It's a clear, golden, smooth IPA with a hop-forward aroma, dry hopped with Simcoe with just enough malt backbone from the Golden Promise pale malt to support the IBUs [International Bittering Units]," McWilliams says.