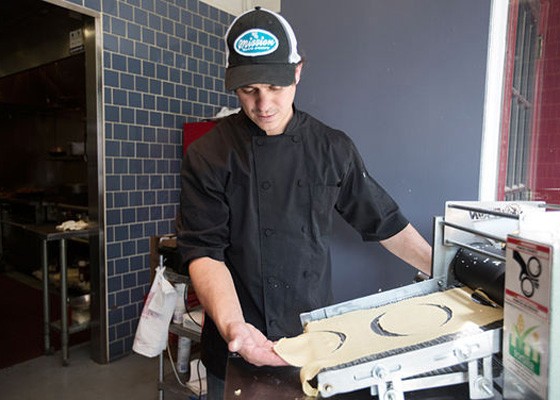 Mission Taco Joint (6235 Delmar Boulevard; 314-932-5430) acquired a space on the Hill last year to make its own masa for fresh tortillas. The brothers Tilford, Adam and Jason, started making their own hot sauces in the "commissary," -- it's actually a full line kitchen -- and have just added a catering service to fully utilize the space. We talked to Jason Tilford about the changes for Mission in the new year.

"I wanted to do two barrel-aged [sauces] because that's kind of trendy and popular and fun. They're smoky flavored; the other two, I call them fresh flavored," Tilford tells us, referring to the morita, chile de arbol, habanero and serrano flavors. "I wanted to go with those because you don't always see them. You see jalapeño, chipotle -- I wanted to do some other chiles that aren't so mainstream, just to be a little different."

The sauces first appeared at the new Maplewood specialty shop Larder & Cupboard, and Tilford says before the holidays, co-owner Cindy Higgerson was selling out before Mission could restock the shelves. The restaurant is beginning to distribute the sauces in earnest this month, at places like Straub's and "all the farmers' markets."

The sauces are also in demand from fellow chefs around St. Louis -- Steve Ewing of Steve's Hot Dogs already has a bunch. Mike Johnson at Sugarfire Smokehouse will be getting some, too. Still, Mission is focused on building up an inventory right now so nobody is left empty-handed.

The Mission Taco catering service developed out of simple demand. Tilford says both of the kitchens are just big enough to cover restaurant operations, so at the very most they could swing large takeout orders, and maybe a special catering order for a friend. But the space on the Hill allows Mission to cater large parties that it used to have to turn down. Just last week it did the food for about 200 people at a judge's retirement party.

"We used to have to say 'no' all the time and that sucked," Tilford says. "We're pretty excited about it."