Three months is barely enough time to garner a reputation, but Cooper's is already legendary -- at least, according to its name. Speak with Bill Komlose, however, and it's clear why he was tempted to oversell. Cooper's Legendary American Pub is the realization of a dream for this former insurance broker. He had been waiting his entire life to open a bar of his own, so perhaps he thought calling it "Cooper's Pretty Darn Good Pub" would have been anticlimactic -- though it would have been much more on point.

Together with his wife and sister-in-law, Komlose converted the former Eros spot on Main Street in St. Charles into Cooper's Legendary American Pub. A long bar occupies the length of the pub, and fewer than ten tables make up the main dining area in the back. Historical details remain, like the warm exposed brick and a high tin ceiling, and there is a stunning view of the Missouri River from the large back patio.

Komlose describes his menu as upscale bar food or comfort food -- a step above the frozen wings and Bud Lights peddled by his neighbors. But the menu begins with a few missteps. The steak boats, for example, are hollowed-out potato skins advertised as being topped with "prime" steak. I expected large chunks of succulent meat; instead, just a few tidbits of overcooked, diced steak cubes were sparsely scattered over the skins. Likewise, the "Crunch and Goo" was neither. The bland shell noodles, tossed in a watery white sauce and topped with fried spinach, was flavorless and difficult to share. 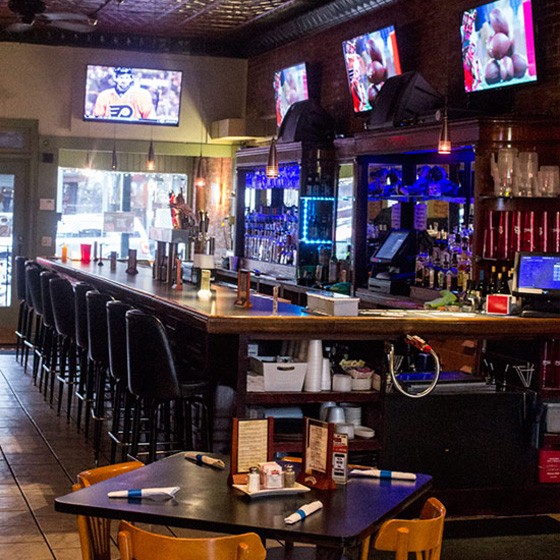 Things quickly turned around when our order of "Flaming Wings" arrived. The name is not just a reference to the spicy flavor -- the wings are served in a skillet and lit ablaze tableside. Cooper's predecessor was a Greek restaurant (the chef stayed on with the new owners), and the preparation was decidedly reminiscent of saganaki, which also involves a showy flambé presentation. It's debatable whether this did anything for the flavor, but the wings didn't need any help. The thick, fiery sauce was similar to a traditional Buffalo wing sauce, kicked up with coarse black pepper and a distinct clove taste.

I was disappointed in the fish tacos, especially after our server's confident sales pitch. The small portion of battered whitefish was overwhelmed by a tequila-lime slaw. A sprinkle of pico de gallo and healthy drizzle of Sriracha mayonnaise sauce further smothered the fish. The flavors worked well together, but the tacos simply needed more meat. I also would have preferred warm corn tortillas to the too-thick flour ones.

Cooper's "Big Boy" burger is a well-executed pub staple. The ground-beef patty is served on a simple Kaiser roll with traditional trimmings and had a nice flame-grilled flavor. I was pleased with the burger but thrilled by the steak sandwich. The thick, medium-rare rib eye, charred by a seasoned grill, is served on buttery cheese garlic bread. I opted to add sautéed mushrooms and onions to this already flavorful melt. Komlose is the son of a butcher, and a lifetime of experience evidently taught him how to make the perfect steak sandwich.

Cooper's flatbread was another treat. The cracker-thin naan is akin to St. Louis-style pizza but crispier. A thick layer of creamy roasted chicken spinach dip smothered the golden crust, and molten Provel cheese bubbled on top, adding to an already decadent goo factor. Cooper's calls the flatbread "personal-sized," but it's so large and rich, I could only eat two pieces.

The "Four Cheese Stuffed Meatloaf" packed all of the white cheddar, pepper jack, Provel and parmesan into one pocket of the loaf, so it failed to make a significant impact overall. The beef itself was moist and crumbly, and the tomato "blanket" was a rather sweet, ketchup-y sauce that reminded me of Mom's -- an enjoyable touch of nostalgia. Komlose says it is one of his top sellers -- the other being his old family recipe fried chicken. Cooper's buttermilk-brined bird arrived juicy and searing hot, coated in a sweet, peppery crust. My platter consisted of a large breast and thigh, and some rustic smashed potatoes covered in an overly salty gravy (ask for it on the side). It was a delicious interpretation.

It's doubtful that legends will be told of Cooper's -- at least, not yet. But if Komlose is content with more down-to-earth praise for his cozy Main Street spot, he may find his lifelong dream has a shot at reality. 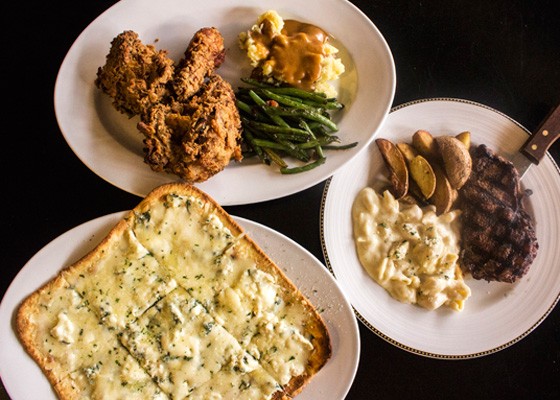