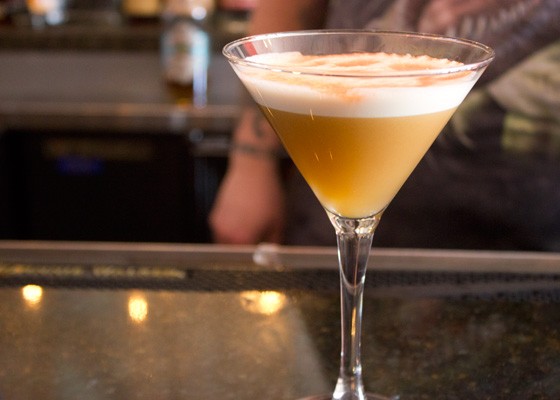 A few weeks ago, we picked cocktails and bartenders for our "Underrated/Overrated" series and asked readers to vote on the place they think has excellent cocktails but doesn't get enough attention. As voting went on, it became clear that Layla (4317 Manchester Avenue; 314-553-9252) and the Good Pie (6665 Delmar Boulevard, University City; 314-899-9221) were going to take the top two spots.

Before we could declare a winner, though, Layla owner and barman Tony Saputo got in touch and offered a sit down with himself and the Good Pie's bar manager, Jeffrey Moll, Jr. "We are both big fans of each other and I personally think he is producing easily some of the greatest drinks in the city," he wrote.

Moll and Saputo worked together very briefly at the Good Pie, but they both count each other as professional inspiration. At Layla on a recent afternoon, Saputo invited Moll behind his bar. While the Good Pie is known for its somewhat challenging cocktail list as well as the Neapolitan pizza, Layla enjoys more of a dive bar status.

"I want to be able to present just as good of a drink as Jeff or Planter's House, but at the same time, I have people who want a round of bomb shots and people who want Malibu Cokes," Saputo says. 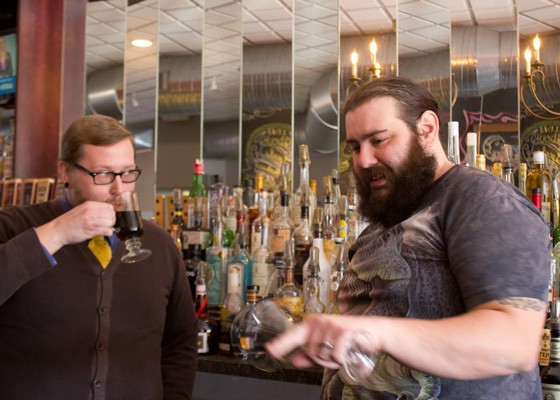 "I hope it goes more in the direction of [that]," Moll tells us. "People have kind of lost the ability to still have fun, and that's one thing I really love about what Tony's doing. You can get a good cocktail here and still have fun at the same time. I just want to see bartenders having fun and people having fun drinking."

That doesn't mean a less composed cocktail, though. Saputo is trying to get rid of that Malibu coconut rum, after all. Both say the resurgence of craft cocktails in St. Louis is also a return to basics -- classic, well-made drinks and complex flavors.

"This place looks fucking weird as shit. This whole bar's a red herring, we like to call it," Saputo admits. "There's a bunch of people, everyone's having a good time, good craft beer, people doing shots. But there's also Fernet behind the bar, and you order an old fashioned and it's legit."

Both bartenders also have the fun of taking what someone likes (liquors, flavors) and creating something for them. Saputo says it's a good way to steer a neophyte in the right direction. Moll says he gets a lot of it, since some people look at his high-brow cocktail list with skepticism.

"I get a lot where somebody'll be like, 'I don't know what I want!' and they're super novice on the idea of cocktails, and I can lead them in," Saputo says. "Where [I also get] people who know about Jeff Moll and appreciate what he does, [come in and] are like, 'I want this because I want to see what you're gonna fucking do with it.' I have a much lower bar as far as that goes." Saputo laughs, but he also notes that he's about to begin his tenure as president of the St. Louis Bartenders' Guild.

As far as new bartenders, who usually come out "guns blazing" but without a lot of knowledge, the two advise reading as many books as possible and getting out and tasting. "Stop passively consuming and start actively tasting," Saputo says.

Their prediction for the future? That things will continue to move toward quality cocktails, but as the audience's knowledge level and palate progresses, things will actually become more laid back.

"I think when the cocktail bubble bursts -- and I think it will -- you'll see places that are really hoity-toity go away. I think [craft cocktails] will always be appreciated, and what me and Jeff do will keep going and keep evolving but more laid back," Saputo says. He laughs, and it's hard not to, too. " And not, 'Oh, here's your Manhattan, it's $18.' People are gonna be like, 'I know what I'm drinking now, fuck off.'"