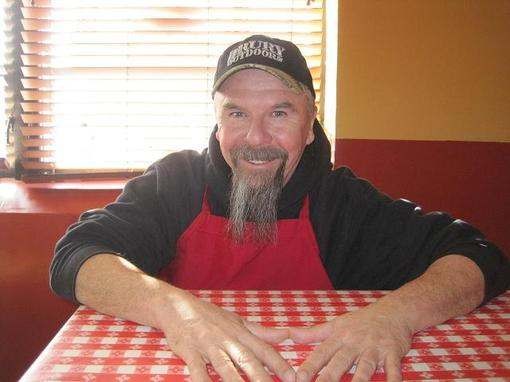 Long before the legendary barbecue, the throngs of adoring fans lined out the door and that famous beard, Mike Emerson was a little kid who loved the outdoors. "My family was always hunting and fishing -- I've been doing those things since I could walk," the Pappy's Smokehouse (3106 Olive Street; 314-535-4340) pit master recalls. "We were always doing some sort of outdoor cooking. It's what I grew up with."

See also: Danny Meyer Was in St. Louis Which Obviously Means We're Getting a Shake Shack

Emerson credits this rustic way of cooking with getting him into barbecue, but says his restaurant savvy (though he'd never call it that) comes from his time spent learning under legends of St. Louis dining. "I've been in the restaurant business from when I was fifteen until my mid-twenties," Emerson says. "I started out as a busser, usually doing front-of-house work. I worked for the Del Pietros and even Mayor Slay's dad. I was taught by restaurant royalty."

This preparation is most likely what kept him from going down in flames when word of his barbecue spread nationwide. "We were just chugging along -- someone who knows this sort of thing told us that our website was getting around 500 hits per day," says Emerson. "Then I went on a national show, and we got 5,000 hits in one hour."

It hasn't slowed down since, unless you count the week he was closed around the holidays this year. "There's always someone in the restaurant," Emerson notes. "At all hours of the day -- either prepping or cleaning or something. But when we were closed this year, I went into a completely empty restaurant. It's the first chance I've had to just sit there in the middle of it and really think about it all. I looked at the walls covered with memories. There's nothing on them that doesn't have meaning. This place is filled with it."

Emerson took a break from turning out the town's most famous (and best) barbecue to share his thoughts on the St. Louis dining scene, his not-so-secret crush and why it's important to watch the sunrise.

What is one thing people don't know about you that you wish they did? That I still look at life in amazement. I might be older, hopefully a little wiser, but I'm still in awe of the people around me, and the cool things they do.

What daily ritual is non-negotiable for you? Coffee, and watching the sunrise. Sunrise is a daily gift and should not be missed.

If you could have any superpower, what would it be? X-ray vision. I like to play blackjack occasionally, and that would really help.

What is the most positive trend in food, wine or cocktails that you've noticed in St. Louis over the past year? It's the continuing trend of helping the next generation of talent. It expands the playing field, and keeps the veterans of our industry sharp.

Who is your St. Louis food crush? I don't think it's a secret -- there's nobody I love more in this town than my buddy, Kevin Nashan [Sidney Street Cafe, Peacemaker Lobster & Crab Co.]. Nobody keeps the light shining on all of us, more than Kevin. (Qui Tran [Mai Lee] is a close second).

Who's the one person to watch right now in the St. Louis dining scene? I would say David Choi [Seoul Taco]. I love the stuff he is doing. Plus, he's one of the good guys.

Which ingredient is most representative of your personality? Blackstrap molasses. Slow, a little sweet, and hopefully it will put a little smile on your face.

What is your after work hangout? It used to be the Shanti in Soulard. I'm in search of a new spot, but the Shanti will be tough to replace. It was beyond description.

What's your food or beverage guilty pleasure? Fritos and peanut butter. They were a dietary staple in my youth, and I still indulge, occasionally.

What would be your last meal on earth? I've been blessed and fortunate to have a lot of great meals in my life. My last meal would be something prepared with my friends and family. We'd be on a tropical beach, and at the end they would all push my little boat out to sea. I'd like that.