WildSmoke (12316 Olive Boulevard, Creve Coeur; 314-548-2222) announced yesterday that it will be closing January 10 in order to remodel the restaurant and relaunch as EdgeWild Bar & Grill. Owners Andy and Dee Dee Kohn also own EdgeWild Restaurant & Winery (550 Chesterfield Center, Chesterfield; 636-532-0550); the new place will be considered a "spinoff" of the original restaurant. 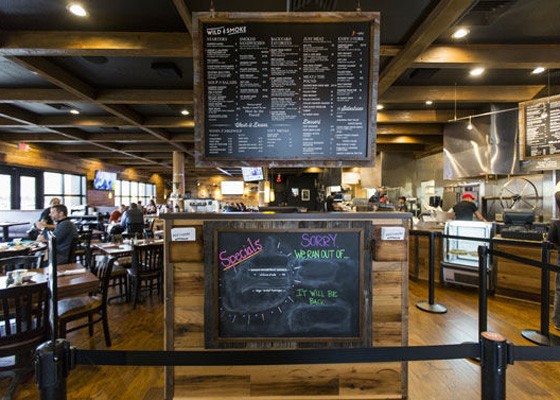 WildSmoke opened in January 2014 to mixed reviews. It did barbecue well, but faltered a little bit when it tried to branch out with what our critic called gimmicks. It won the title of Best Wings in St. Louis at the annual Wing Ding competition, and we loved them as well.

"The plump, juicy wings are triple-rubbed with seasoning that tastes of brown sugar and Worcestershire; it coats the wings in a sticky glaze," Riverfront Times critic Cheryl Baehr wrote. "Dipping sauce is wholly unnecessary."

The restaurant was first launched after EdgeWild's "Smokin' Sundays" were so successful. Dinner service and a full bar were later added. According to a statement from the Kohns' restaurant group implied that the not-so-sophisticated interior might have been part of the problem.

"We noticed that while many of our patrons were all-out barbecue fans, enjoying our fare regardless of the features and amenities, the majority expected a dining experience like that of EdgeWild," said director of operations Todd Wyatt. (We noted the decor was that of a "seasoned chain: leather booths with cowhide fabric, Western-themed tchotchkes on the walls, track lighting and plasma televisions. Character is replaced with kitsch.")

The new EdgeWild Bar & Grill will focus on a more traditional American menu. There will be a large central bar and a menu full of "traditional bar food, appetizers, sandwiches and regional fare." EdgeWild executive chef Aaron Baggett will oversee both kitchens. You can expect EdgeWild part deux to open in spring 2015.

"WildSmoke worked well on many levels, but it ultimately was not a good fit for us," Andy Kohn said in a statement. "We had success with our smoked meats, and customers had their menu favorites. We also enjoyed a strong, consistent lunch crowd. But at the end of the day it just wasn't enough to hit the mark we set for ourselves as a restaurant group."