Overcooked 2014: Local Chefs Dish on the Food Trends That Need to Die Now 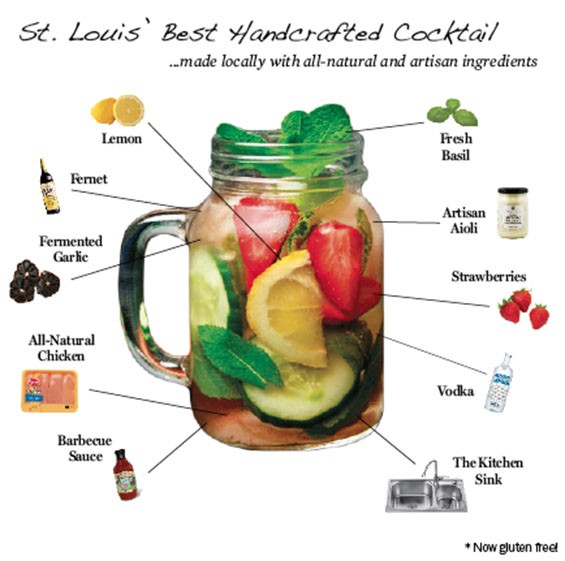 This time last year, our editors and critics wrote about the food trends they were sick to death of in 2013 and couldn't wait to see fall from favor in 2014. Included were chicken and waffles, putting an egg on everything and so on.

This year, we went to some real experts -- the chefs, mixologists and pit masters who are St. Louis' literal tastemakers. We asked a handful of them to tell us which trends they're hoping will die in 2015 -- unsurprisingly, they had plenty to say.

I'm so over Kevin Nashan. Every time I turn around, he's cooking for charity or helping a local farmer. This is America, where we look out for ourselves first! You'd think the guy would be happy with owning Sidney Street Cafe, but nooooo. He has to go open Peacemaker, that joint a lot of people are calling St.Louis' best new restaurant. I'm telling ya, every time I hear his name, it's like fingernails on a chalkboard. (And I'm REALLY over anybody who thinks I don't love the guy.) Happy holidays!

Trends themselves and "fermented" versus rancid. Also, I've never understood some chefs saying, "That's not the clientele we are going for." Really? They have money, right? And not everything has to have a "program" in a restaurant. Back in the day it was just called a great restaurant!

Let me just start by saying this is not meant to offend. Now that that is out of the way, I am over the "gluten free" trend. I understand that celiac disease is a real thing, but to the general population that thinks eating less gluten is going to somehow benefit their waistline: This is just nonsensical. Everything in moderation, people. Eat bread, be proud.­

The trend I wish would end is the greenwashing of menus. Greenwashing is the lie told to customers to make them believe the food is locally sourced or sustainable or organic when, in fact, it is bought from a big-box vendor. For example, a restaurant could have local pork and local beef on the menu, but won't mention that the chickens come from Tyson -- some good purchases give an air of green practices to the entire menu. Other times, the restaurant might not change the printed menu from listing a local farmer's beets even after beet season is over -- they've just quietly replaced them with commodity beets. Possibly the most deceptive is not the fault of the restaurant -- it may buy a meat labeled "natural," but the animals are still from a concentrated animal feed operation (a feedlot). Some big meat companies brand their various products as "natural" or "high in Omega-3s," but in reality, the animals are raised the same way as the mainstream meats with some small differences for the finishing feed. This late-stage alteration in the animals' diet is supposed to have health benefits, but they would have occurred naturally from a pasture-raised diet.

What's the solution? Schlafly Bottleworks recently moved their menu format to have more flexibility in structure and reprinting. So, as farm seasons change, their printed menu can reflect availability. Also, restaurants can limit their menus so as to focus on the non-big-box food or focus on serving less meat. Finally, restaurants can educate their staff about the provenance of their items so that truthful answers can be given to the question, "Where did this chicken come from?"

Deconstructing desserts is a savory chef's way out. "Let's make this look like something, call it, hmm...tiramisu! Yeah, that sounds recognizable. People love tiramisu. Oh shit, tiramisu usually has some kinda coffee element, right? OK, we'll grind up some coffee beans, smoke them overnight, toss them in some 'local' bacon fat, sprinkle it on the plate and call it 'organic, farm-raised espresso debris. Then we'll overcharge you!" It's the death of dessert.

Why can't food be food? The point of a dessert is to give you that last bit of pleasure -- to seal the deal. When that plate comes to your table, there's a certain amount of euphoria that one experiences. When you eat it, all is right in the world. For that moment, it's just you and the plate. But if you have to ask a server's advice on how you should attack it, I'm already done. Give me a snack cake. I'm going home.

Natasha Bahrami, owner and bartender at the Gin Room:

My two favorite words to never again see on a menu are "brioche" and "aioli," yet I'd devour any meal doused in "garlic." Vaguely written menus and cast-iron plating can also take a seat. Unless I'm at my Grandma Jones' house for her famous hot-water cornbread and collard greens, I'll pass on the façade.

I'll jump for joy when we are finally over the Mason jar obsession and the year of "everything plus the kitchen sink" cocktails. I've definitely been guilty of million-ingredient cocktails, but there is so much more to be appreciated about a simply crafted cocktail. And I know I'll catch flak for saying this, but the whole barrel-aging-cocktails craze and its price tag is getting out of hand. If I want a Negroni, just make me a Negroni.

Oh, and I'll pass on any variety of pretty grasses and edible flowers disguised as my main course. No thank you!

"Crafting," specifically handcrafting food. As chefs, we spend hours a day playing with food and recipes, trying to perfect delicious dishes for our guests, and we take great pride in this. Some time ago, it seemed that every fast food and restaurant chain in the country adopted the word "handcrafted" to promote their brand while serving the same mediocre processed crap. Some restaurant chains advertise that they have "artisanal handcrafting chefs" consulting for them, whatever that means. It would be better if they spent those marketing dollars on product development and making nutritious, wholesome food.

Barbecue. How many barbecue joints have opened in the past year? It seems like 30, and all the ones I've been to have been united in missing a huge part: the sides! I love the idea of barbecue: apply meat, smoke and time (and seasoning, too). There you have it, right? No. It takes more then just good meat to make a killer barbecue spot. I'd give my left arm (yes, I'm a leftie) to be able to go to a barbecue spot just for the sides. A killer original cornbread. Real baked beans (that aren't directly from a can), seasonal vegetables.

Fernet. Can we all just admit that this doesn't taste good? It is the go-to shot for bartenders and servers, and I get that we don't do shots because they taste good, but perhaps something a little more tolerable than alcoholic cough syrup?