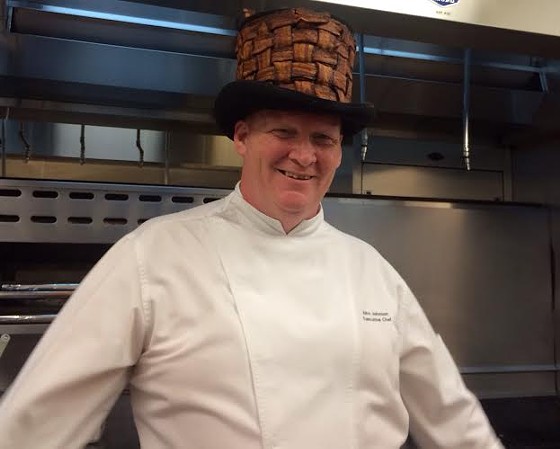 "Did you know that a pineapple is actually a berry?" John Johnson asked when we first met. The River City Casino (777 River City Casino Boulevard; 314-388-7777) executive chef is filled with these sorts of fun facts. One guesses they come from his time spent as a history major in college, but actually, it started much earlier. "My mom would have us learn about a different country every week when we were growing up. We'd sit around the table, talk about different places, their foods -- it's where I first got interested in cooking."

See Also: Have Lunch Inside a Life-Size Gingerbread House This Holiday Season

Johnson originally got into the kitchen to put himself through college, but eventually found that this was his calling. He enrolled in culinary school, and ended up in the casino business at its Mecca, the MGM Grand Hotel and Casino in Las Vegas. As its executive chef for banquets, Johnson got quite an education in high-volume dining. "We'd do plate-ups for 14,000. It wasn't rare to serve 40,000 people in a night."

Johnson took a break from manning his latest creation for River City, a life-size gingerbread house, to share his thoughts on the St. Louis dining scene, his love affair with a local salumeria and on drinking the milk of dragons.

What is one thing people don't know about you that you wish they did? Growing up being a chef was never a dream for me. I always wanted to entertain friends and family. It started with painting, then acting and poetry when I was younger, then food became my medium and cooking became my passion for entertaining people -- telling a whole story from the first bite to last. You can see this in the food that we cook in our restaurants at River City Hotel & Casino.

What daily ritual is non-negotiable for you? Hugging my wife and thanking her for inspiring and being on this adventure with me.

If you could have any superpower, what would it be? The power to heal others and to give myself immortality. I truly love this life and what it, brings. The good is worthless without the bad, and they have come together to be a great experience that I never want to end.

What is the most positive trend in food, wine or cocktails that you've noticed in St. Louis over the past year? There is a singular goal by all chefs in St. Louis: St. Louis born or St. Louis adopted, all chefs here are striving to grow and evolve the St. Louis food, wine and cocktail experience beyond anyone's dreams. It started way before I came to St. Louis. I am honored to have the opportunity to cook at our River City Restaurants and watch the evolution of food in St Louis grow and develop in 2015.

Who is your St. Louis food crush? A love affair with Salume Beddu. I use some of their meats in 1904 Steak House.

Who's the one person to watch right now in the St. Louis dining scene? I am watching the young cooks who are just starting in this business. They are watching all the chefs who are doing the great work now. I want to see what they are going to do in the decades to come.

Which ingredient is most representative of your personality? Salt...It is the director that brings different talents together to create the entertainment on the stage that all flavors dance on.

If someone asked you to describe the current state of St. Louis' culinary climate, what would you say? It's the sleeping giant that is stirring just before the sun rises and the world realizes how great it is.

Name an ingredient never allowed in your kitchen. Can't think of one, there is a place and time for everything. If I had to say I would say...a negative attitude.

What is your after work hangout? Anywhere and everywhere friends are talking about what we are going to cook next. Inspiration can be found in the most unexpected places.

What would be your last meal on earth? 28-course meal beginning with fresh corn tortilla and menudo with diced onions and lime.