Following news that officer Darren Wilson would not be indicted on Tuesday night, an evening of protests led to the vandalism of restaurants and businesses in Ferguson as well as South Grand. The following day, members of the St. Louis community began clean-up in south city, responding to a call for volunteers to paint boards placed on several South Grand restaurants and businesses' windows. Artists convened throughout the day and well into the evening with brushes in hand as onlookers stopped to snap photos.

Even as snow started to fall this afternoon, St. Louisans continued to volunteer their time and talents to giving the popular shopping and dining district a fresh coat of paint. Read on to get a glimpse of some of the murals created over the past day. 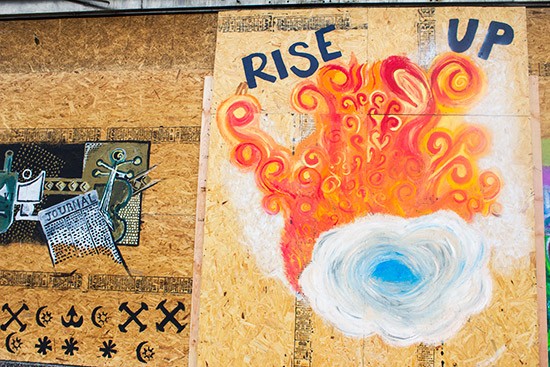