The holidays are around the corner, which means it's time for Grandma Bea or crazy Aunt Myrtle to make their annual winter pilgrimage from Boca Raton back to St. Louis. Or perhaps you're overdue for a lunch date with Mom that typically involves white-wine spritzers. If this is your predicament, dear reader, I'd like to make a special suggestion: Take them all to Mary Ann's Tea Room.

Located in one of the ornate McPherson storefronts in the Central West End, Mary Ann's Tea Room is named after Mary Ann Allison, a former socialite and Mizzou homecoming queen. Allison used to own the space, but she died in 2009 while trying to save her many pets from a fire at her home in Clarksville. When the building went up for sale, local businesswoman Karen Halper bought it for her store, Enchanting Embellishments. Halper had always dreamed of owning a proper English tea room, and when she saw the building's greenhouse space, she knew it was perfect. Halper was so moved by Allison's story that she decided to pay her homage by naming the tea room in her honor -- Mary Ann's portraits and story hang on one of the walls. 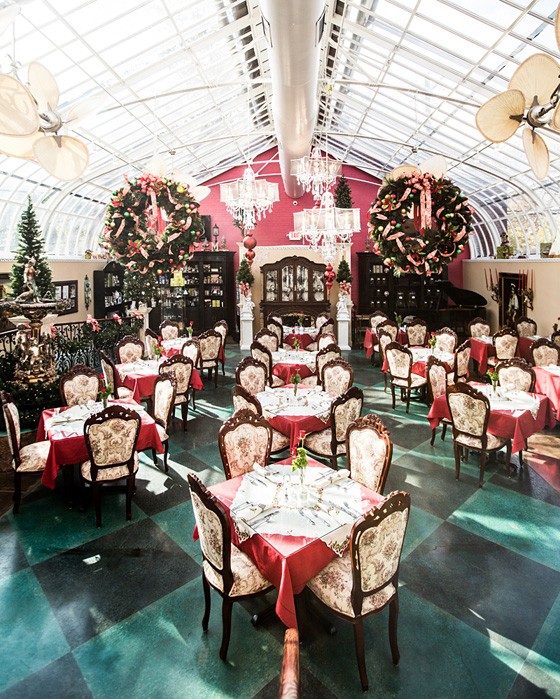 The kitchen at Mary Ann's Tea Room is run by chef Ben Herbert, a veteran of Patty Long Catering. In consultation with Stephen Proctor of the Fox Theatre, Herbert developed a menu that would work in a kitchen with minimal facilities (because of the codes that govern historic buildings, Mary Ann's doesn't actually have a full-size kitchen). Instead, Herbert relies on catering-style equipment (a convection oven, tabletop burners) to prepare the food.

There's no subtle way to put this because there's nothing subtle about this restaurant. It's eccentric. Like Liberace-eccentric, like 80-year-old Dallas heiress-eccentric. Mannequins in the window vamp in glitzy frocks, and a Christmas tree wearing a gigantic bedazzled top hat greets visitors near the front door. Tea-room patrons make their way through the boutique -- past fur stoles, sequined blazers and wine charms -- and into a converted greenhouse decorated with a large assemblage of tchotchkes: ornate candelabras, porcelain fountains with cherubs, rhinestone napkin rings, replica Roman busts adorned with long-stemmed roses. "We like to say it looks like if Marie Antoinette had money," the hostess said as I opened my menu.

Thankfully, Mary Ann's has tea infusions that contain booze. I began with the "Beach Cruiser," a deliciously balanced mango and strawberry tea-based cocktail with lime juice, mint, fresh berries, mango slices and a generous pour of rum. The "Teach Me Peachy" is a refreshing, gin-forward libation accented with peach and lychee tea, lemon juice and basil. Sitting in the sunny greenhouse with Bombay-style fans spinning overhead, this was a pleasant start to lunch.

The restaurant excels at soups. The French onion is a rich, beefy version of the classic, topped with herbed crostini (though on one visit, the kitchen failed to melt the Gruyère cheese garnish). Butternut squash soup -- a special of the day -- was better executed. The thick, creamy soup teemed with chopped apples, giving sweet and tart notes to balance out the richness. A decadent crab bisque was filled with lump crab meat and topped with a caviar garnish -- this dish alone is worth the visit.

Beyond the soup course, however, I discovered some big problems. The Niçoise salad, for example, was a tragedy. The reason the server failed to take a temperature on the tuna became clear when the salad of tomatoes, hard-boiled eggs, cornichons, new potatoes, green beans and Dijon vinaigrette-tossed baby greens arrived topped with a fishy, canned tuna. It had the look (and smell) of a can of Friskies.

The "Prosperity" sandwich was similarly baffling. This open-face sandwich resembled a cross between ballpark nachos and something fumblingly thrown together in the kitchen after a marathon night of barhopping. Untoasted white bread -- the kind that balls up to the size of a marble when squished in the hand -- was covered with dry deli turkey and ham, bacon bits, herb-roasted tomatoes and a thick layer of gooey, bright orange cheese sauce. This soggy, salty mess was nearly impossible to eat.

The chicken-salad sandwich was more successful. Chunks of seasoned chicken breast, grapes, almonds, celery and scallions were tossed with tarragon crème fraîche dressing and served on a flaky croissant. It's the Platonic form of a "ladies who lunch" chicken salad. The chicken pie was also enjoyable -- the buttery shell was stuffed with large pieces of roasted white-meat chicken, water chestnuts, mushrooms, potatoes, carrots and onions. Gruyère cheese melts over the top, adding a funky richness to this hearty entrée. The mushroom quiche was fair, but unremarkable. The shell itself was light, but the mushroom and red pepper egg filling was overcooked and separated from the crust.

A duo of savory salmon cheesecake and a filet of hot-smoked salmon was tasty. The cheesecake -- sourced from Hank's -- had an herbed crust that served as a base for creamy, dill-flecked salmon and cream cheese mousse. The filet was equally enjoyable, tasting of sweet fruitwood smoke.

For dessert, Mary Ann's offers a few house-made selections. The pumpkin souffle had a pleasantly warm, chai-like taste, though it was denser than expected and more like a bread pudding.

One's enjoyment of Mary Ann's Tea Room comes down to demographics. If you enjoy antiquing, drinking pinot grigio on ice or listening to Josh Groban, you'll have a great time. If you don't, well, at least you've made Mom's day.