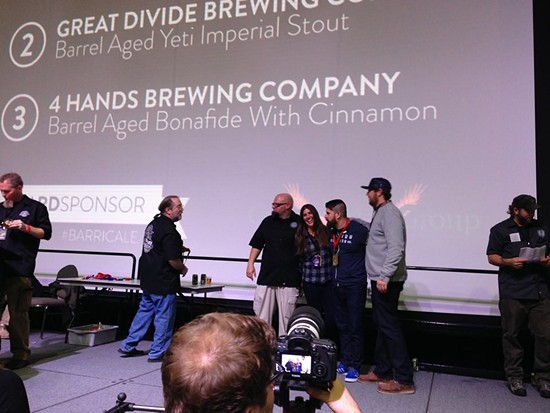 Perennial Artisan Ales (8125 Michigan Avenue; 314-631-7300) and 4 Hands Brewing Company (1220 South Eighth Street; 314-436-1559) both took home medals from the twelfth annual Festival of Barrel Aged Beers in Chicago over the weekend. Hosted by the Illinois Craft Brewers Guild, the festival celebrates beers that have been aged in wooden barrels.

The contest within the festival, officially named the National Wood Aged Beer Competition, saw 112 breweries from across the country submit 275 beers to be judged in one of eleven categories. Each beer is judged by a panel of industry experts based on how well it reflects the wood or barrel character. Many of the beers are one-off trials and may not be available commercially.

Perennial won a gold medal in the "Experimental Beer" category for its Barrel-Aged Abraxas, a Mexican chocolate stout aged in rye whiskey barrels. The beer also finished as first runner up for Best in Show. This is the second year in a row that the BA Abraxas has won the category, and the third year in a row that it has medaled.

4 Hands won silver in the Barleywine/Wheatwine category for its Volume 2, and bronze in the Strong Porter/Stout category for its Barrel Aged Bona Fide with Cinnamon. Volume 2 is an old ale aged in bourbon barrels. It's the brewery's second entry in its wood series -- high-gravity ales aged in spirit barrels. BA Bona Fide with Cinnamon is a special version of its Bona Fide Imperial Stout, a collaboration with Goshen Coffee. It was also aged in bourbon barrels.