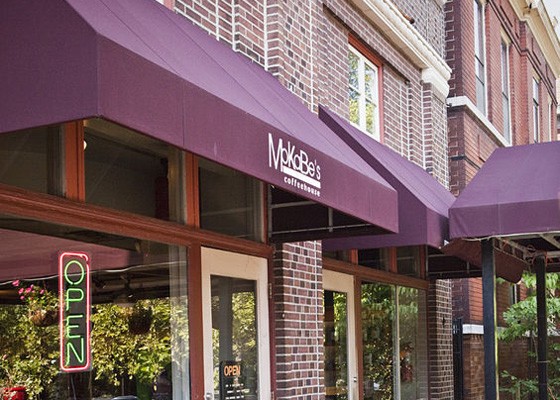 It seems the whole of St. Louis is on edge as the St. Louis County prosecutor's office prepares to announce the grand jury's decision on whether or not to indict officer Darren Wilson for the shooting death of Michael Brown. Churches are offering official safe spaces and coordinating with north-county schools, and law enforcement is preparing for the worst.

Whenever the decision is announced -- it's expected as early as next week -- protests may begin again in Ferguson, the Shaw neighborhood (where Vonderrit Myers was shot last month) and perhaps even Clayton, where the grand jury is deliberating.

MoKaBe's (3606 Arsenal Street; 314-865-2009), a Shaw/Tower Grove East coffeehouse known for its long-time community activism, posted a statement on Facebook this week that has some people very upset, while others are rallying in support.

MoKaBe's announced it will serve as an unofficial safe space for activists to stay warm, use the bathroom, charge their phones, and get something to eat and drink in the days after the decision is announced.

In the comments, some vowed never to patronize MoKaBe's again. "It's ok, the police supporters would never tear your place up, you have nothing to fear but the loss of revenue when we never spend a single penny in your establishment again. Unlike Myers and Brown supporters we don't assault or loot," wrote one.

Others wrote that people are missing the point: "Those that see your stance as anything but the considered and peaceful gesture of community support it is are willingly missing the point. Thanks."

Posters on the message board St. Louis CopTalk did not take MoKaBe's announcement lightly. (It should be said that not everyone on CopTalk is necessarily a police officer, it is a public forum.) In a thread titled "A Business That Supports Cop Killers" user Bucket Joe wrote this:

The continued public protest in the City of St. Louis by activists calling for peace and justice, signify by their actions that they support cop killers!

Having said that, MoKaBe's Coffeehouse, located at 3606 Arsenal, (314) 865-2009, announced via Facebook on Monday, November 11, 2014, that they too, support "cop killing," and will act as a "safe place" for protesters after the Grand Jury makes their announcement.

Please share this information with as many people you know via conversation, social media, email, etc. The community to needs to know the names of businesses who support cop killers!

Although Bucket Joe uses quotes around "cop killing," that phrase does not appear anywhere on MoKaBe's Facebook page. We reached out to CopTalk posters via the aforementioned thread, but did not get a response. We'll update if we hear from them. You can read the entire thread here.

MoKaBe's declined comment for this story, but it appears that despite the backlash it will be going ahead with their plans to serve as a protester safe space.

Meanwhile, another coffee shop, Shameless Grounds (1901 Withnell Avenue; 314-449-1240), known for its sex-positive stance, posted a vehement endorsement of MoKaBe's decision on its own Facebook page:

You can find a list of churches and other places offering shelter if needed following the Grand Jury decision here.