Pass the Chesterfield Valley outlet malls and cross the Boone Bridge, and you'll find yourself at a fork off the Highway 94 exit ramp. If you turn left, you'll be amongst the rolling hills of Missouri wine country. A right turn looks like it takes you into beige suburban terrain without much beyond the Bed & Bath. But duck down a small side street headed north and the landscape turns from subdivisions to historic downtown Cottleville, a quaint strip of genuine, old-timey storefronts, poised to become the Edwardsville of St. Charles County.

The oldest standing building in Cottleville houses Plank Road Pizza, a recent addition to the city's burgeoning dining scene (the acclaimed Stone Soup Cottage, one of the metropolitan area's top restaurants, is located down the road). Named for the old Western Plank Road -- once literally made from wooden planks -- that connected St. Charles and Cottleville, the restaurant serves American-style, wood-fired pies reminiscent of an independent California Pizza Kitchen. Owner Andrew Brewer was taken by the 1840s-era building, originally envisioning it as an ice cream parlor, and eventually settling on pizza as a better year-round concept. He bought the building, did some remodeling, planted a garden and fired up the oven. 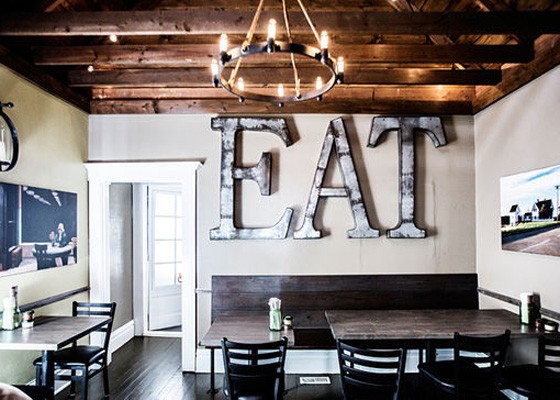 The interior of Plank Road Pizza is a bit like the inside of a refurbished barn. Brewer removed the floorboards that separated the first floor from the attic, creating a loft with exposed wooden rafters. A rustic candelabra-style chandelier hangs from the ceiling, and a large metal sign that simply reads "EAT" adorns one of the walls. The space is small -- roughly ten tables, made out of wood from Brewer's grandfather's barn and the old attic floorboards, dot the dining room. The patio, with its vine-filled trellises and garden-like setting, more than doubles the restaurant's seating capacity. During warm weather, it's the place to be. Plank Road Pizza's menu includes only a handful of non-pizza items. The restaurant's one appetizer is pizza chips and salsa -- small triangles of thin and crispy pizza dough seasoned with oregano-heavy Italian spices, yet not nearly enough salt. I thought the accompanying salsa was a garnish -- about a quarter cup of thickly chopped tomatoes, red onions and green peppers. There was no seasoning, no garlic, no lime juice, nothing that made it a salsa.

The entrée-sized salads proved to be the better starters. The "Apple Orchard" salad consisted of mixed lettuces, red onions and Gorgonzola cheese dressed in balsamic vinaigrette. Dehydrated apple chips and candied pecans provided a sweet, crunchy accent. It was an excellent salad except for the chopped pieces of dry, bland chicken breast thrown in. The "Fall Harvest" salad was made from Arcadian lettuce, red onions, cucumbers, cranberries, mandarin oranges and sunflower seeds. Its zesty cranberry citrus dressing was reminiscent of cranberry sauce on Thanksgiving Day.

Plank Road Pizza's wood-fired crust is thick and soft, with pillowy edges that have just a hint of browning while the underside is speckled with char -- not strictly speaking a Neapolitan-style crust, but delicious nonetheless. Brewer tinkered with 50 variations before settling on this current recipe, and his efforts paid off. The pies themselves -- all named after historic St. Charles roads -- enjoy mixed success. I liked the "St. Charles Street," a sauceless version topped with pieces of Buffalo-spiced chicken breast, red onions, roasted garlic, mozzarella and Gorgonzola cheeses. A sprinkling of raw, thinly sliced celery adds some crunch, while drizzles of ranch dressing and vinegary hot sauce added a cool, pleasant heat. The restaurant's namesake, the "Plank Road," is like a chicken bacon club sandwich in pizza form. Instead of sauce, the dough is brushed with olive oil then topped with pieces of breast meat, bacon, red onions, diced tomatoes and mozzarella cheese. The pizzaiola garnishes the pie with chiffonade-cut lettuce, slices of avocado and ranch dressing after it comes out of the oven. The dish needed some seasoning -- even with the bacon, I found myself wanting to add salt -- and it suffered from the same dry chicken problem that seemed to plague many of Plank Road's dishes. These simple tweaks will turn it into a tasty dish.

Plank Road Pizza is, again, not an authentic Neapolitan pizzeria. However, this does not excuse its egregious misinterpretation of the Margherita pie. Called the "Main Street," this bastardization had a tomato-sauce base that was so heavily herbed it had the consistency of pesto. A few sad-looking slices of tomato drowned in the sauce, and even fewer slices of half-dollar-size fresh mozzarella cheese failed to provide any gooey richness. The same tomato sauce worked on the "Boone's Lick," however. This take on a hamburger pizza consisted of house-made meatballs, red onions and mozzarella. On its own, the beef was underseasoned, but the sauce balanced it out. 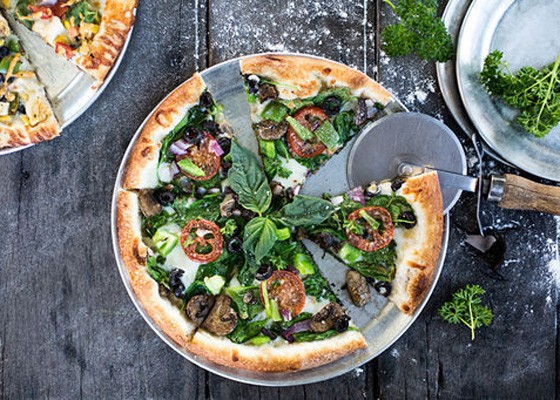 I raised an eyebrow at the gimmicky dessert pizzas but was pleasantly surprised. In particular, the pumpkin pie was a tasty riff on the traditional autumn dessert classic. Spiced pumpkin and cream cheese were generously spread over the dough and baked in the wood oven. Cinnamon and a few dollops of whipped cream finished this delicious end to the meal.

Plank Road Pizza's road to greatness may still be under construction. However, with a charming atmosphere and some of the best crust in town, it has laid the right foundation.